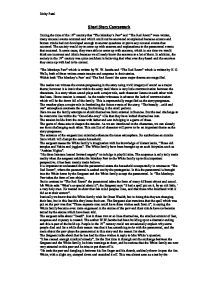 Short Story Coursework During the time of the 19th century that "The Monkey's Paw" and "The Red Room" were written, many unusual events occurred and which could not be answered or explained because science and human minds had not developed enough to answer questions or prove any unusual events that occurred. The society would try to come up with answers and explanations to the paranormal events that occurred. In some cases, they were able to come up with answers, which in our time we would think are incorrect and idiotic because we all ready know the answers to a lot of them. In addition, the society in the 19th century was quite confident in believing that what ever they heard and the answers they came up with had to be correct. "The Monkeys Paw" which is written by W. W. Jacobs and "The Red Room" which is written by H. G. Wells, both of these writers create tension and suspense in their stories. Within both 'The Monkey's Paw' and 'The Red Room' the same major themes are magnified. The reader can witness the events progressing in the story using vivid imagery of sound as a major theme; however it is ironic that within the story itself there is very little communication between the characters. In a story where sound plays such a major role, each character listens to each other with deaf ears. Hence tension is created. As the reader witnesses in advance the lack of communication which will be the down fall of the family. This is exponentially magnified as the story progresses. The weather plays a major role in foreboding the future events of the story, "The beastly...cold and wet" atmosphere contrasts the snug fire burning in the small parlour. Here we see the family attempts to shield themselves from external influences. But the real challenge to be overcome lies within the "Out-of-the-way" villa that they have locked themselves into. ...read more.

He heard the creaking of the bolt as it came slowly back, and at the same time he found the monkey's paw, and frantically breathed his third and last wish". "The knocking ceased suddenly, although the echoes of it were still..." sound is used again to create the image of what the atmosphere in where this part of the story takes place. In this story the use of sound to help create an image of form in the readers mind has been very successful and helps give the story a lot more depth. "A long loud wail of disappointment and misery from his wife gave him the courage to run down to her side and then the gate beyond. The street lamp flickering opposite shone on a quiet and deserted road". Now the nightmare which the old man went through is ultimately over, the sounds that he heard before was he mentality and fears taking over him and controlling him. "Red Room", which is written by H. G. Wells, is very different in contrast to "The Monkeys Paw". As I said before in "The Red Room" the supernatural is hunted out by the protagonist and it is also important to remember that in "The Monkeys Paw" the paranormal takes the formal of one object in disparity to "The Red Room" where the paranormal takes the form of shadows and sounds. In both stories the characters go from non-believers of the supernatural to believers and this is important to keep in mind. "I can assure you, ` said I , that it will take a very tangible ghost to frighten me", we can already tell that that this first character we have met is very confident in what he says and he implies that he is a non-believer of ghosts. The old couple, to whom the man is speaking, gives him some advice, "It is your own choosing", but he says it doubtfully know his own confidence and ego will bring him into trouble. ...read more.

happening to the narrator, and we see that as well as being unsure about the proceedings, he starts to become delusional when he half facetiously addresses the darkness: "'Steady on!' I said. 'These candles are wanted.'" Here for the first time we get the impression that he has started to believe in the supernatural, addressing the ghost, and no longer looking for a scientific explanation for what happened. We see that even after he has sunk into atavistic irrationality, he still finds comfort in the fire. This is symbolic, once again of how pre-historic men would rely on and gather round the fire, which gave light giving them a sense of surety and safety just as the narrator does when all else fails. We see that where before he spoke to the ghost with confidence, he now sounds as if he is pleading to the 'darkness' to stop, as he cannot control it himself. Finally in a state of panic and confusion he begins to run around the room at pace to relight the candles, not really knowing what he is doing and the use of phrases such as: 'darted to and fro' and 'made a run for the door' along with a mixture of long, complex and short, rushed sentences all magnify the speed of the story. This leads to one final pinnacle when the narrator 'screamed...thrice,' showing us one final time that he cannot cope with what he cannot explain and his veneer of pragmatism and civilization has been ripped away from him. Consequently when he wakes up in daylight the next morning in the original room his tone changes from what it was at the beginning of the tale. At the start we saw how his tone was confident and somewhat patronising towards the custodians, almost challenging a 'tangible' ghost. However the first thing he said the next morning is, "'Yes' said I, 'the room is haunted." His accepting tone here contradicts with his reluctant tone at the beginning. Ricky Patel ...read more.