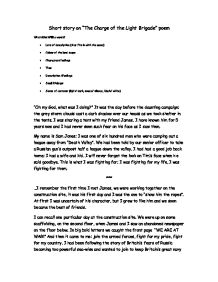 Short story on The Charge of the Light Brigade poem

Short story on "The Charge of the Light Brigade" poem What Miss Willby wants? * Lots of description (that fits in with the mood) * Colour of the land scape * Characters feelings * Time * Description /Feelings * Small Dialogue * Sense of contrast (light/ dark, sound/ silence, black/ white) "Oh my God, what was I doing?" It was the day before the daunting campaign; the grey storm clouds cast a dark shadow over our heads as we took shelter in the tents. I was sharing a tent with my friend James. I have known him for 5 years now and I had never seen such fear on his face as I saw then. My name is Sam Jones; I was one of six hundred men who were camping out a league away from "Death Valley". We had been told by our senior officer to take a Russian gun's outpost half a league down the valley. I had had a good job back home; I had a wife and kid. I will never forget the look on Tim's face when he said goodbye. ...read more.

*** Back at the camp it was getting late. James and I were conversing about tomorrow. We were all having a laugh with the others who had been joking and having fun - but you could see it, you could see it in their eyes, the fear, the waiting. The worst part was the waiting. Not knowing what would happen next. It was silent in the mess tent. Everyone was subdued and there was little chatter. No one was eating, we were all too nervous to eat. We knew we were going into battle and wondered if we would ever return, some people were starting to regret joining because they might not see what would happen in the end. I overheard some conversations but it was clear to see in their eyes. Someone dropped their plate and the clatter was like the gunshots we were waiting for. *** Judgement day. The trumpets signalled that it was time to prepare. I jumped out of bed and pulled on my uniform, we didn't have time for breakfast. ...read more.

The stench cordite as the Russians opened fire, the usual friendly smell of the horse was concealed by the stench of fear and death. There is a black hatred inside me for all the Russians who have taken the lives of all my friends in this cold blooded ambush. It was a blood bath. Looking over the battlefield when we made it back from a massive ambush it was devastating. Almost our whole brigade was just wiped out in seconds. My eyes were searching for James but all I could see were bodies squirming in the distance. James was nowhere to be found. I wish I knew, I wish I knew what happened. The unknown made me uneasy as he could have been captured; he could still have been on the battlefield. It was a big mistake going into the valley of death because we lost a lot of men. I lost a great friend. I don't regret joining the army because I know I fought for my country and sometimes that's the price you have to pay. But it isn't easy to forget the blood bath in the valley. Was it worth it? Only time will tell. ...read more.

This is an effective attempt to use the events of the poem to construct a narrative about one fictional trooper and his experience of the cavalry charge. The essay writer successfully creates a credible character and describes the events from his point of view, with his emotional responses.

The essay is a little short to do justice to the task; more could be made of the traumatic experience of the charge, in particular.