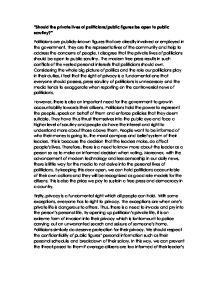 Should the private lives of politicians be open to public scrutiny?

"Should the private lives of politicians/public figures be open to public scrutiny?" Politicians are publicly-known figures that are directly involved or employed in the government. They are the representatives of the community and help to address the concerns of people. I disagree that the private lives of politicians should be open to public scrutiny. The modern free press results in such conflicts of the vested personal interests that politicians should own. Considering the whole big picture of politics and the role our politicians play in their duties, I feel that the right of privacy is a fundamental one that everyone should possess, press scrutiny of politicians is unnecessary and the media tends to exaggerate when reporting on the controversial news of politicians. However, there is also an important need for the government to grow in accountability towards their citizens. Politicians hold the power to represent the people, speak on behalf of them and enforce policies that they deem suitable. They have thus thrust themselves into the public eye and face a higher level of scrutiny and people do have the interest and right to understand more about those above them. ...read more.

Politicians similarly do deserve protection for their privacy. We should respect the confidentiality of public figures' personal information such as their personal schedule and breakdown of their salary. In this way, we can prevent the threat posed to them if average citizens are too informed of their leader's details. If a politician's privacy is overexposed to the public, no one would want to be our leader. Secondly, the extent of coverage on the scandals by the media has been rather excessive. The media loses their focus on their purpose and role as the reporting press to provide the masses with information on much more pertinent issues like the wars and environment. This phenomenon of the news media reporting about the personal decisions that they make has resulted in people being focused on the wrong topic. People tend to lose their concern of the policies implemented by the government and enquire more about the personal life of politicians. The private lives of politicians are not really much of a concern of the people and its does not affect their lives greatly. ...read more.

Our politician's private life is more important to some of us than the constitution that governs our lives. For some reason, we seem to pay more attention to the media when the issue that is being discussed involves a politician being caught having an affair than when it involves politics. Unless the private lives of politicians affect their ability to lead, the media should focus on the politics instead of the personal lives of politicians. In conclusion, politicians own the right to privacy and they are after all humans who prefer to live simple lives like others. It is a great error to invade peoples' lives without their approval. The media should constantly engage in useful dialogue with politicians about the current problems and what future policies they would foresee. Enquiring about politician's private lives are just of no use to the country. However, it is true that those who stand for public office and claim to be suitable to lead our country, should expect their private lives to be worthy of investigation and public debate. People would only trust in their leadership if politicians are honest about their personal life. ...read more.