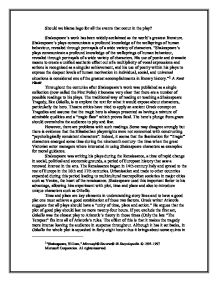 Should we blame Iago for all the events that occur in the play?

However some critics find Desdemona's goodness to be overdone - somewhat too good to be true - and one should consider the extent to which this seems a fair criticism. Iago's perception of Venetian woman is certainly very different, as we see in his conversations with Roderigo and Othello, where Iago suggest that they are unfaithful and corrupt and that Desdemona is worse than a common prostitute. Her relationship with other characters is the most important part of her, although she is a credible person in her own right in the play, not a two-dimensional caricature like Iago. She is mature and balanced in her views: she sees divided duty between her father and her husband at the start of the play; she is sympathetic to the situation of others, like Cassio. She is concerned for Othello when he feels unwell and for his safety when his ship is delayed; she expresses an interest in the opinion of others, like Emilia, but is tactful when they are different. Black and white is applied to skin pigmentation in a subtle way in the play. Iago has the black heart whilst the Moorish Othello, by his own admission, has a heart which "lov'd not wisely, but too well." In contrasts to this, a more straightforward role is taken by literal darkness and light in the play, also subtle, for it is connected to the other image of Black/White and angel and devil. Notice, for example, that although three of the five acts occur during darkness or at night- with only act 3 and 4 being in bright daylight - it is during the daylight acts that the deceptions take place. During broad daylight, when Othello is certain that he is seeing things most clearly, the conversation between Iago and Cassio convinces him that Desdemona has been false to him, when in fact the two men are talking about an altogether different woman- Cassio's admirer, Bianca. ...read more.

Also at the end of the third scene, Iago sets forth his plan to take Cassio's position, by telling Othello that his lieutenant ". . . is too familiar with his wife." It also comes out in this speech that he suspects Othello of committing adultery with his wife. Near the end of the first scene of the second act, Iago convinces Roderigo, who was observing Cassio's enthusiastic greeting of Desdemona, that Cassio and Desdemona are concealing something between them. Thus manipulating Roderigo through his passion for Desdemona, Iago convinces him to provoke Cassio to anger, so that the lieutenant will be discredited in Othello's eyes and Iago can take his position. At the end of this scene, he again makes reference to his role not being what it seems: "Knavery's plain face is never seen till us'd." In the last scene, after Othello has killed Desdemona, all of Iago's schemes are revealed by his wife, who was his unwitting accomplice in his schemes. After she has betrayed him, he kills her and flees, only to be caught and brought to justice. Othello's flaw, as Iago pointed out, was that he was "... of a free and open nature,/That thinks men honest that but seem to be so,/And will as tenderly be led by the nose/As asses are." Thus, Iago's scheming and role-playing character made it easy for him to manipulate Othello, which led to Othello's fall. From his actions in the play, one sees that Iago is a gifted manipulator of other people who uses underhanded schemes, manipulation of others, and betrayal at appropriate times. Thus, one could say that the whole play is a parable showing the "vile success" such tactics bring, and also showing the reward awaiting those who use them. Hence, Iago in Othello is a schemer and manipulator, who causes the deaths of all of the virtuous characters in the play while attempting to advance his position and revenge himself upon Othello for a rumoured affair with his wife. He is portrayed by Shakespeare as a completely unsympathetic character. ...read more.