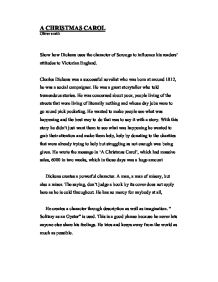 Show how Dickens uses the character of Scrooge to influence his readers' attitudes to Victorian England.

A CHRISTMAS CAROL Oliver smith Show how Dickens uses the character of Scrooge to influence his readers' attitudes to Victorian England. Charles Dickens was a successful novelist who was born at around 1812, he was a social campaigner. He was a great storyteller who told tremendous stories. He was concerned about poor, people living of the streets that were living of literarily nothing and whose day jobs were to go round pick pocketing. He wanted to make people see what was happening and the best way to do that was to say it with a story. With this story he didn't just want them to see what was happening he wanted to grab their attention and make them help, help by donating to the charities that were already trying to help but struggling as not enough was being given. He wrote the message in 'A Christmas Carol', which had massive sales, 6000 in two weeks, which in those days was a huge amount Dickens creates a powerful character. A man, a man of misery, but also a miser. The saying, don't judge a book by its cover does not apply here as he is cold throughout. He has no mercy for anybody at all, He creates a character through description as well as imagination. ...read more.

Belle was his fianc�e his whole life but then he gave it up on money and business, "Our contract is an old one. It was made when we were both poor and content to be so, until, in good season, we could improve our worldly fortune by our patient industry. You are changed. When it was made, you were another man." Which Belle implies knowing that all Scrooge wants now is money due to his bitter greediness and she realises that he has know more feelings towards her. This is the turning point in his life when he chooses money over love. Dickens here is presenting his readers with a character who was not only wholly, unfeeling and misanthropic and is there fore capable of change back to his old self. The ghost of Christmas present reveals to scrooge the consequences of his behaviour on others. His meanness as an employer is shown when he sees his employee's family, Bob cratchit was paid very badly by scrooge He just about manages to survive on the money that he gets. Even though they are poor and in poverty they try and keep their spirits up and have fun. Bob arrives home with his disabled son Tiny Tim who had got out of breath by the slightest excitement, they had just been to the church and were singing on the way back. ...read more.

This proving more that scrooge has changed. Then he goes and meets his nephew at his house where he asks to go in to his servants and goes upstairs giving his nephew's wife a shock to see him, and then asks his nephew if he can join them for lunch like his nephew asked him for the day before. He plays a trick on Bob the next morning when Bob arrives late for work. He tries and puts on his grumpy voice has a go at Bob then says "Now, I'll tell you what, my friend," said Scrooge, "I am not going to stand this sort of thing any longer. And therefore," he continued, leaping from his stool, and giving Bob such a dig in the waistcoat that he staggered back into the Tank again;" and therefore I am about to raise your salary for you and your struggling family." A Christmas carol is an imaginative story to catch the readers mind using ghosts and try and make them a better person. The character of scrooge is used as a tool to make the reader think of their own attitudes towards charities. I personally think it has changed me a little about how the way the poor people live and get around life and how hard these charities work. OLIVER SMITH ...read more.