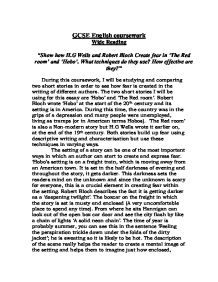 &quot;Show how H.G Wells and Robert Bloch Create fear in 'The Red room' and 'Hobo'. What techniques do they use? How effective are they?&quot;

GCSE English coursework Wide Reading "Show how H.G Wells and Robert Bloch Create fear in 'The Red room' and 'Hobo'. What techniques do they use? How effective are they?" During this coursework, I will be studying and comparing two short stories in order to see how fear is created in the writing of different authors. The two short stories I will be using for this essay are 'Hobo' and 'The Red room'. Robert Bloch wrote 'Hobo' at the start of the 20th century and its setting is in America. During this time, the country was in the grips of a depression and many people were unemployed, living as tramps (or in American terms Hobos). 'The Red room' is also a Non-modern story but H.G Wells wrote it earlier on, at the end of the 19th century. Both stories build up fear using descriptive writing and characterisation but use these techniques in varying ways. The setting of a story can be one of the most important ways in which an author can start to create and express fear. 'Hobo's setting is on a freight train, which is moving away from an American town. It is set in the half darkness of evening and throughout the story, it gets darker. This darkness sets the readers mind on the unknown and since the unknown is scary for everyone, this is a crucial element in creating fear within the setting. Robert Bloch describes the fact it is getting darker as a 'deepening twilight'. The boxcar on the freight in which the story is set is musty and enclosed (A very uncomfortable place to spend any time). From where he sits Hannigan can look out of the open box car door and see the city flash by like a chain of lights 'A solid neon chain'. The time of year is probably summer, you can see this in the sentence 'Feeling the perspiration trickle down under the folds of the dirty jacket'; he is sweating so it is likely to be hot. ...read more.

The story of this murderer is very big in the papers since he has killed many people before; this has encouraged many hobos like Hannigan to go on the run. 'The knife', to Hannigan is the fear above all fears so when at the end he sees the dead man and feels breath on his neck he is petrified because he knows that it is 'the knife' and knows what his fate will be. The other characters in 'The Red Room' are all servants at Lorraine castle. There are three of them, two old men and an old woman; they appear at the beginning and end of the story. The old woman is the housekeeper of Lorraine castle, during the first section she seems unfriendly and she only speaking three times. The first time she speaks it is to explain that he still has a lot to see in his youth and that the castle is very different from anything he has ever seen. The other times she speaks are just to say 'This night of all nights!' the housekeeper seems slightly crazy in the way she repeats this but this seems to be mainly because she is scared. Though she seems solitary and uncaring, she lays the fire ready for the young man showing that she actually does care. At the end of the story, the old housekeeper acts normally and seems inquisitive to know about the ghost, maybe to dispel her fear. The first of the male servants is 'the man with the withered arm'. Other than the fact that he has a withered arm, we know nothing about his physical appearance. This servant seems to talk the most, trying always to dissuade the young man from going to the red room .As a reader I also get the feeling that he does not want to be held responsible for any strange event that happens in the room; he keeps reminding the young man 'it is your own choosing'. ...read more.

The setting, a Boxcar on a freight train, is enclosed and on reflection, it is quite an ingenious place to set a thriller story. Since few stories have been set in such a place you do not expect a thriller story straight away, this enhances the element of surprise, yet reduces the element of suspense provided when a reader knows roughly what to expect. Although the authors of both stories have written them successfully, certain elements are more effective than other elements at creating fear. For instance in 'Hobo' I found the way that Robert Bloch surprises the reader with the twist at the end very imaginative and clever since he leaves the reader in suspense and perhaps fear, wanting more. But I thought that he could have encouraged the reader to feel a little more suspense and fear by making Hannigan's descriptions of 'The knife' more expressive. I did feel however that the way that he described Hannigan's reaction to 'The Knife' was very successful. In 'The Red Room' there are many successful elements, the choice of setting and the descriptions of Lorraine castle is H.G. Wells' first, and perhaps most effective, fear creating element, as I previously explained, castles are spooky places and the well written descriptions of the castle are handy in building up tension and fear. As with most stories, there are less successful points. I feel that if H.G. Wells had not written in such precise detail, and instead encouraged the reader to imagine certain things more he could have created more emotion and most importantly, fear. This said, we are living in a world where people have become de-sensitised to fear, back then, just before and after the beginning of the twentieth century people were much more sensitive to fear in thriller writing and so the writer had to do less to create fear. This reason is also, why I found neither story to be particularly frightening although I did imagine how frightening it would have been for its intended audience and used this thinking to answer the essay question. Helen Crutcher ...read more.