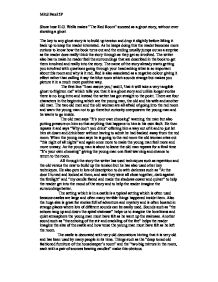 Show how H.G. Wells makes "The Red Room" succeed as a ghost story, without ever showing a ghost The key to any ghost story is to build up tension and drop it slightly before lifting it back up to keep the reader interested. As he keeps doing this the reader becomes more curious to know how the book turns out and the ending usually jumps out as a surprise as the reader does really think the story through as they get so involved. The writer also has to make he reader feel the surroundings that are described in the book to get them involved and really into the story. The name of the story already starts getting you involved with questions going through your head asking what is so important about this room and why is it red. Red is also associated as a negative colour giving it effect rather than calling it say the blue room which sounds strange but makes you picture it in a much more positive way. ...read more.

When the young man says he is going to the red room the old woman cries out "this night of all nights" and again once more to make the young man feel more and more uneasy. As the young man is about to leave the old man repeats for a final time "It's your own choosing" giving the young man one final warning and chance to return to the room. All through the story the writer has used techniques such as repetition and the old versus the new to build up the tension but he has also used other key techniques. He also puts in lots of description to do with darkness such as "At the door I turned and looked at them, and saw they were all close together, dark against the firelight" and "my candle flared and made the shadows cower and quiver" to help the reader get into the mood of the story and to help the reader imagine the surroundings better. ...read more.

Onomatopoeia is also used with words such as "rustling" and "crackling" being used to describe the scene better. Metaphors such as "my candle was a little tongue of light in its vastness, that failed to pierce the opposite end of the room, and left an ocean of mystery and suggestion beyond its island of light" and "the flames were still dancing between the glowing coals, and splashing red reflections upon the furniture" are also used to help the reader imagine how the young man felt and to give the story that extra sense of mystery. The ending is usually the most exciting part of the book as the reader finds out what's in the red room and soon finds out that it was there own fear that they were afraid of not something in the room. This is much like a young child who is afraid of the dark when they are young only to eventually realise that there's nothing to be afraid of and that it is there own imagination which is causing the fear. ?? ?? ?? ?? Mitul Patel 5P ...read more.