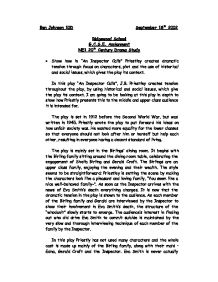 Show how in &quot;An Inspector Calls&quot; Priestley creates dramatic tension through focus on characters, plot and the use of historical and social issues, which gives the play its context.

Ben Johnson 10D September 18th 2002 Ridgewood School G.C.S.E. Assignment NE1 20th Century Drama Study * Show how in "An Inspector Calls" Priestley creates dramatic tension through focus on characters, plot and the use of historical and social issues, which gives the play its context. In this play "An Inspector Calls", J.B. Priestley creates tension throughout the play, by using historical and social issues, which give the play its context. I am going to be looking at this play in depth to show how Priestly presents this to the middle and upper class audience it is intended for. The play is set in 1912 before the Second World War, but was written in 1945. Priestly wrote the play to put forward his ideas on how unfair society was. He wanted more equality for the lower classes so that everyone should not look after him or herself but help each other, resulting in everyone having a decent standard of living. The play is mainly set in the Birlings' dining room. It begins with the Birling family sitting around the dining room table, celebrating the engagement of Sheila Birling and Gerald Croft. The Birlings are an upper class family, enjoying the evening and their wealth. The style seems to be straightforward; Priestley is setting the scene by making the characters look like a pleasant and loving family, "You seem like a nice well-behaved family-". As soon as the Inspector arrives with the news of Eva Smith's death everything changes. It is now that the dramatic tension in the play is shown to the audience. As each member of the Birling family and Gerald are interviewed by the Inspector to show their involvement in Eva Smith's death, the structure of the "whodunit" slowly starts to emerge. The audience's interest in finding out who did drive Eva Smith to commit suicide is maintained by the very slow and thorough interviewing technique of each member of the family by the Inspector. ...read more.

Priestley uses the Inspector to create the drama and the tension in the play by Goole being in control of the characters on the stage. The drama and tension rises gradually from before the Inspector's arrival. Everything is very calm and cheerful at the engagement dinner until Sheila comments "Yes- except for all last summer, when you never came near me". This is the first hint of any friction within the family. The audience is now listening carefully to what this could mean. With the Inspector's arrival and the questioning of Arthur Birling, the news of a suicide starts the audience wanting to know who was to blame. The hideous way that Eva died is extremely dramatic and the Inspector repeats this information a number of times throughout his questioning. For a young woman to drink disinfectant and burn their insides out is a dramatic death. The tension rises with the questioning of Sheila and her part in Eva's life and death. To the audience this is another character that could have been the deciding factor in Eva's death. As Gerald tries to persuade Sheila that they can keep the news of his affair with Daisy from the Inspector, Goole slowly opens the door and says questioningly "well?" This concludes Act One abruptly and leaves the audience wondering what could possibly happen next. Act Two begins exactly where Act One finished. There is tension between Sheila and Gerald over his affair with Daisy. Gerald's questioning by the Inspector begins. Here is another character that was involved in some way with Daisy, although apart from breaking their affair off, Gerald did not treat Daisy too badly. The inspector seems to deal with Gerald less harshly than the others, since his only real crime was his unfaithfulness to Sheila Birling. As the drama and tension increases through each interview, it is the turn of Mrs Birling. ...read more.

Although all the characters played a part in Eva/Daisy's death, I feel the person most to blame is Mrs Birling. As a responsible adult she should have done all she could for Eva/Daisy. She had the power to help Eva/Daisy but in not doing so pushed the young woman over the edge to commit suicide. It was her role in the charity to help girls like Eva/Daisy, but she didn't like her and for that reason refused Eva/Daisy's cry for help. Mr Birling was also to blame in some way as it was he who first made Eva's poor life worse by sacking her and wanting to make an example of her to the rest of the workforce. Eva then got the sack again through Sheila's jealousy. Gerald briefly made Daisy happy until he finished their affair although he did not consider how she would manage. Eric was weak and made Daisy's life even more tragic by using her and getting her pregnant. To his credit though he did try to help Daisy by offering her money, even though he had to resort to stealing it and had every intention of paying it back somehow. Having studied "An Inspector Calls" in some detail the play does not show that one person is to blame for the society of that day, however the whole of society should share the responsibility. The moral of the play is that each person should look out for his neighbour and no one person is better than another. Everyone should share the responsibility of caring for the less fortunate and help them to achieve better lives. I believe that J.B. Priestley put across his point extremely well. He used Sheila and Eric as symbols that a brighter future lays in the younger generation, and the Inspector as a conscience for the characters, to manipulate them and help the audience to look at their own lives and how they treated others. If just one person went away from the play with this thought then I believe the play was worth writing for Priestley. ...read more.