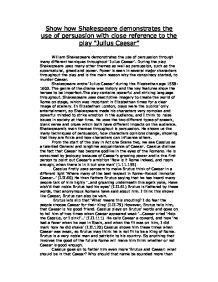 Show how Shakespeare demonstrates the use of persuasion with close reference to the play &quot;Julius Caesar&quot;

Show how Shakespeare demonstrates the use of persuasion with close reference to the play "Julius Caesar" William Shakespeare demonstrates the use of persuasion through many different tecniques throughout 'Julius Caesar'. During the play Shakespeare uses many other themes as well as persuasion, such as the supernatural, greed and power. Power is seen in several major characters throughout the play and is the main reason why the conspiracy started, to murder Caesar. Shakespeare wrote 'Julius Caesar' during the Elizabethan age 1558-1603. The genre of the drama was history and the key features show the heroes to be imperfect.The play contains powerful and striking language throughout. Shakespeare uses descriptive imagery to create the world of Rome on stage, which was important in Elizabethan times for a clear image of scenery. In Elizabethan London, plays were the publics' only entertainment, so Shakespeare made his characters very complex and powerful minded to strike emotion in the audience, and I think to raise issues in society at that time. He uses the two different types of speech, blank verse and prose which both have different impacts on the audience. Shakespeare's main themes throughout is persuasion. He shows us the many techniques of persuasion, how characters opinions change, showing that they are fickle and how characters can influence others. From the start of the play in Act one Scene two, we see Cassius as a talented General and longtime acquaintance of Caesar. Cassius dislikes the fact that Caesar has become godlike in the eyes of the Romans. He is consumed by jeolousy because of Caesar's growing power and is the first person to point out Caesar's ambition 'Now is it Rome indeed, and room enough, when there is in it but one man' (1.11.155) Cassius firstly uses sarcasm to make Brutus think of Caesar in a different light 'Where many of the best respect in Rome-Except immortal Caesar...' (I.II.60) ...read more.

She tells him 'Do not go forth today: call it my fear that keeps you in the house, and not your own'' (II.II.51) She persuades him succesfully at first to stay in that day because of the dream she had about Caesar's statue 'Which like a fountain with an hundred spouts, did run pure blood; and many lusty Romans Came smiling, and did bathe their hands in it: and these does she apply for warnings and portents..' ( II.II.78) However when Decius comes to Caesars house to make sure he is coming to the capitol that day he interprets the dreams in another way to try and persuade Caesar to come, as the conspirators have planned to murder him that day. 'This dream is all amiss interpreted; it was a vision fair and fortunate: Your statue spouting blood in many pipes. In which so many smiling Romans bath's signifies that from you great Rome shall suck...' ( II.II.83) Decius, to persuade Caesar even more, says that 'and know it now: the senate have concluded to give this day a crown to mighty Caesar' (II.II.93) When Casear hears this, he dismisses what his wife has said. Her persuasion was unsuccesful because Caesar felt he needed to go the Capital, or else he would be made fun of by the people of Rome, because woman were not seen as equal. He goes to the Capital that day, only to find out that her prophecies and the omens that she thought indicated a warning were true. These two examples of persuasion used by the wives of Caesar and Brutus indicate to us the audience that woman's points of views and worries did not effect their husband's decisions. In both cases, their persuasion was unsuccesful and dismissed by their husbands. I think this shows us, that at the time Shakespeare wrote 'Julius Caesar' woman did not play an important role in their husbands lives, and were very much kept away from secrets they may have. ...read more.

Fighting on the right, in Roman times was more succesful and reserved for the leaders. Octavius says 'Upon the right hand I, keep thou the left' (V.I.18) Mark Antony does not argue with him, and because of this Octavius loses his battle. Romans believed that suicide was the most honourable way to die. At the end, when Cassius persuades Titinius to help him commit suicide, he is seen as less honourable than Brutus. Brutus fails to persuade three people to kill him 'What I, my lord? No, not for all the world.' (V.V.6) so he kills himself. So in the end Brutus proved that he was more honourable than Cassius 'This was the noblest Roman of them all;' (V.V.68) Persuasion is the key element in the play, affecting all the main characters and storyline throughout. Cassius is the main character who uses this technique to his advantage but really because of power, envy and greed. It is because of persuasive men like Cassius that more honourable people like Brutus are brought down. Because of their actions more innocent people are affected too, like Portia. But, like many plays, the other side gets revenge. Brutus' persuasion to let Anthony live allows the sinful people to be punished; both in speeches and on the battlefield. Shakespeare uses the element nature to decide how characters act. Through supernatural incidents, characters act accordingly. This is more exciting for the audience and more interesting to events in the play. The kind of persuasion in this play is sinful and devious, and therefore deserves punishment. Humans are in general sinful, and pay the price, so innocent people are killed. The poet Cinna is killed, purely because he shares the name with one of the accomplices. Portia also kills herself because of the neglect from her husband Brutus. Caesar is also largely innocent, despite what Cassius thinks, and loses his life because of others and not himself. Persuasion is to blame for the wrong doings in the play.It is also the reason why those who commited the wrongs in the first place, are eventually punished. ?? ?? ?? ?? ...read more.