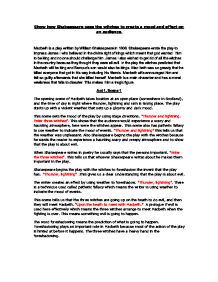 Show how Shakespeare uses the witches to create a mood and effect on an audience.

Show how Shakespeare uses the witches to create a mood and effect on an audience. Macbeth is a play written by William Shakespeare in 1606. Shakespeare wrote the play to impress James I who believed in the divine right of kings which meant that god wanted him to be king and no one should challenge him. James I also wished to get rid of all the witches in the country because they thought they were all evil. In the play the witches predicted that Macbeth will be king and Banquo's son would also be kings. Macbeth was so greedy that he killed everyone that got in his way including his friends. Macbeth wife encouraged him and felt so guilty afterwards that she killed herself. Macbeth is a main character and has a moral weakness that falls to disaster. This makes him a tragic figure. Act 1, Scene 1 The opening scene of Macbeth takes location at an open place (somewhere in Scotland), and the time of day is night where thunder, lightning and rain is taking place. The play starts up with a violent weather that sets up a gloomy and dark mood. This scene sets the mood of the play by using stage directions. "Thunder and lightning. Enter three witches". This shows that the audience would experience a scary and haunting atmosphere, here were the witches appear. ...read more.

The witch's prediction is that Macbeth will become the thane of Cawdor. At this point he is the thane of Glamis meaning he is the lord of a place called Glamis. When the witches say "all hail to thee thane of Cawdor", they are predicting that Macbeth will be the thane of cawdor. "Shalt be King Here after". The witches predict Macbeth will become King. Macbeth is surprised by this news and gets clarification from the sisters. The sisters disappear before responding. The witches re-enter. Third Witch: Hail! First Witch: Lesser than Macbeth, and greater. Second Witch: Not so happy, yet much happier. Third Witch: Thou shalt get kings, though thou be none: So all hail, Macbeth and Banquo! The words "Lesser" and "greater", and "Not so happy" and "happier" are total contrast to each other. The witches use supernatural powers to prophesize the hidden meaning. This also means the witches are predicting that his sons will become kings and he will become king himself. Act 1, Scene 5 As the scene opens, Lady Macbeth is reading a letter from her husband. The letter tells of the witches' prophecy for him, because "I have learned by the perfectest report, they have more in them than mortal knowledge" "The perfectest report" means "the most reliable information," so it means that Macbeth has been asking people what they know about the witches. ...read more.

He also had received the news of his receipt of the powerful title and profitable properties of the disgraced Thane of Cawdor. So in Scene 4 Macbeth brought royal expectations to a meeting of King Duncan I and the leading noblemen of Scotland. Ironically, those expectations quickly were dashed. Conclusion Macbeth believes that the prophecies will still protect him until the very last moment, but he then realises they are being fulfilled. He us killed by Macduff who was not born naturally. Three evil withes foretell that Macbeth will become Thane of DCawdor and even King of Scotland. Macbeth dismissed their prophecies, but after he is promoted to Thane of Cawdor for military action, Macbeth wonders if he shall not be King, too. The witches and his wife are both evil influences on him in the first part of the play. In the last acts, however, he is in control, but he exercises this power badly. Ambition. The witches are important in the play because they predict Macbeth's future. He opens up his path in life to include others as well, namely the withes and his wife. After that event, the true Macbeth is gone, another traveller on the road of evil. I think that both the witches and Macbeths wife are evil but at the end he is in control but he takes it to the wrong path. ?? ?? ?? ?? ...read more.