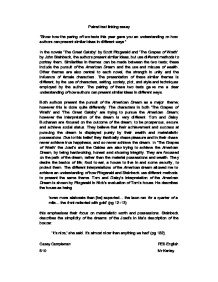 &quot;Show how the paring of two texts this year gave you an understanding on how authors can present similar ideas in different ways&quot;.

Paired text linking essay "Show how the paring of two texts this year gave you an understanding on how authors can present similar ideas in different ways" In the novels 'The Great Gatsby' by Scott Fitzgerald and 'The Grapes of Wrath' by John Steinbeck, the authors present similar ideas, but use different methods to portray them. Similarities in themes can be made between the two texts; these include the pursuit of the American Dream and the use and misuse of wealth. Other themes are also central to each novel, the strength in unity and the influence of female characters. The presentation of these similar themes is different, by the use of characters, setting, society, plot, and style and techniques employed by the author. The pairing of these two texts gave me a clear understanding of how authors can present similar ideas in different ways. Both authors present the pursuit of the American Dream as a major theme; however this is done quite differently. The characters in both 'The Grapes of Wrath' and 'The Great Gatsby' are trying to pursue the American Dream; however the interpretation of the dream is very different. Tom and Daisy Buchanan are focused on the outcome of the dream; to be prosperous, secure and achieve social status. ...read more.

These differing ways of representing the misuse of power show the manipulation and selfishness of the wealthy that both authors want to make clear to the reader, strengthening my understanding of how authors present similar themes in different ways. Writing styles and techniques can also be used in different ways to present similar themes. Both Fitzgerald and Steinbeck use colloquial speech to emphasise the vernacular used by the characters who do not have power in society, and to also reinforce their victimisation by the misuse of wealth by the powerful. In 'The Great Gatsby', Myrtle is shown to speak with poor grammar and the mispronunciation of words; 'I got to call up my sister' (pg 34) 'I got to write down a list ... things I got to do' (pg 43). In 'The Grapes of Wrath' the Oakies are also portrayed using similar speech; 'well, it ain't yourn, an' it ain't gonna be yourn' (pg 274), 'No - but I would a. Twicet to-day she worked my girl up' (pg 377). This use of vernacular shows how the powerless is these societies are portrayed as 'being less than' and inferior to the wealthy, who mistreatment them. Imagery is also used by both authors to show the monstrosity of Tom and the banks and to reinforce their power and wealth, and the abuse of it. ...read more.

symbolises that strength in unity is what will save the Oakies, working together, towards the common good to achieve dreams. The expression 'the twenty families became one family, the children were the children of all'. (pg 225) also reinforces the theme of strength in unity and the need for unison. Steinbeck is suggesting that without it, the quest for the American dream will be hopeless. Throughout society, strength in unity is also shown. In 'The Great Gatsby', unity is shown by the wealthy sticking together, i.e. Tom and Daisy and by the unity of criminals, i.e. Gatsby and Wolfshiem. In 'The Grapes of Wrath' unity is shown by Oakies in the government camp, where the Oakies have the power, and are free from corruption. Steinbeck is suggesting that this is what the Oakies need to accomplish externally to achieve their dream, and without unity the Oakies will never prevail. The pursuit of the American Dream is a major theme throughout the novels 'The Great Gatsby' and 'The Grapes of Wrath'. Other prominent themes are the use and misuse of power, the strength in unity and the influence of female characters. The similarities in themes are presented in very different ways by the authors, F. Scott Fitzgerald and John Steinbeck. By presenting their similar ideas in different ways, I was able to obtain a clear understanding of how authors can present similar themes using different methods. Casey Campleman PES English S10 Mr Kenley ...read more.