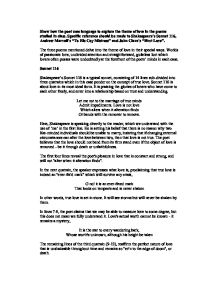 Show how the poet uses language to explore the theme of love in the poems studied in class. Specific reference should be made to Shakespeare's Sonnet 116, Andrew Marvell's "To His Coy Mistress" and John Clare's "First Love". The three poems mentioned delve into the theme of love in their special ways. Worlds of passionate love, undivided attention and straightforward, guileless lust which lovers often posses were undoubtedly at the forefront of the poets' minds in each case. Sonnet 116 Shakespeare's Sonnet 116 is a typical sonnet, consisting of 14 lines sub-divided into three quatrains which in this case ponder on the concept of true love. Sonnet 116 is about love in its most ideal form. It is praising the glories of lovers who have come to each other freely, and enter into a relationship based on trust and understanding. Let me not to the marriage of true minds Admit impediments. Love is not love Which alters when it alteration finds Or bends with the remover to remove. Here, Shakespeare is speaking directly to the reader, which we understand with the use of 'me' in the first line. He is setting his belief that there is no reason why two like-minded individuals should be unable to marry, insisting that if changing external circumstances can alter the love between two, then that love is not true. The poet believes that the love should not bend from its firm stand even if the object of love is removed - be it through death or unfaithfulness. ...read more.

All the trouble she went to in preserving her virginity throughout her life has come to nothing. These sharp words create alarming imagery that would stick in anyone's mind for a long time after hearing them. His shock tactics create a sense of urgency, presenting his lover with her last chance to seize the day before it is too late. In the final section of the poem, Marvell's tone softens. He becomes enthusiastic and gentler, trying to persuade his mistress that to perform the act of love is a wise and appropriate thing to do at this point in time, 'Now therefore, while the youthful hue Sits on my skin like morning dew, And while thy willing soul transpires With every pore with instant fires,' The poet is highlighting the perfection of this woman's physical beauty through the definition of fresh moist skin, he is telling her that she is ripe and now is the time. He is convinced that behind her shy cover up, her "willing soul" is burning for her to lose her virginity. He wants them to passionately have fun together, like "amorous birds of prey". This double entendre leaves little to the imagination, barely disguising the sexual act. In the concluding lines he asks passionately "let us roll all our strength and all our sweetness into one ball"...to spend the rest of time with her making the sun run. We might not be able to freeze time, but we can make it race, and the man in the poem is convinced that if he lures the mistress to succumb to his charms, he will be neck and neck with time to the end. ...read more.

They are also another cyclical representation of time, in that they are part of the cycle that will break her body down into soil, feed the trees, feed an animal, etc. So he tries scare her and to force her into the decision to seize the day. Marvell then stresses the youth she still possess and his plan to save them. He talks about her youthful hue and the morning (of life / youth) glow to remind her what she needs to save from the imposing grip of her grave. He gets very aggressive and speeds up the meter to add effect and urgency to his pleas. Then he talks about birds of prey, Schmidt3 hurrying, and devouring to really twist the proverbial knife and to convince her. After adoring her body for ages and wading through innuendo, he says let us roll all our strength and all our sweetness into one ball and says he wants to spend the rest of time with her making the sun run. Although the message in this poem is universal, throughout time, Marvell's methods are unique for his time. The fact that he used death to persuade a less than eager woman is not new. The way he does it, is. According to Paul Brians, from the English Department at Washington State University, Marvell's imagery of death is so powerful, that the poem transcends the cliched 'lines' of more frivolous writers to become a stirring meditation on the importance of living fully during the brief span allotted us (Brians). Andrew Marvell tries in this carpe diem poem, "To His Coy Mistress," to use time and symbols to convince her to seize the day. ...read more.