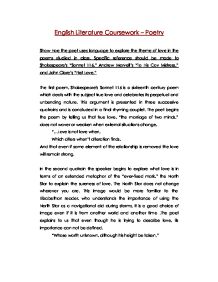 Show How the poet uses language to explore the theme of love in the poems studied in class. Specific reference should be made to Shakespeare's &quot;Sonnet 116,&quot; Andrew Marvell's &quot;To His Coy Mistress,&quot; and John Clare's &quot;First Love.&quot;

English Literature Coursework - Poetry Show Hoe the poet uses language to explore the theme of love in the poems studied in class. Specific reference should be made to Shakespeare's "Sonnet 116," Andrew Marvell's "To His Coy Mistress," and John Clare's "First Love." The first poem, Shakespeare's Sonnet 116 is a sixteenth century poem which deals with the subject true love and celebrates its perpetual and unbending nature. This argument is presented in three successive quatrains and is concluded in a final rhyming couplet. The poet begins the poem by telling us that true love, "the marriage of two minds," does not waver or weaken when external situations change, "...Love is not love when, Which alters when't alteration finds, And that even if some element of the relationship is removed the love will remain strong. In the second quatrain the speaker begins to explore what love is in terms of an extended metaphor of the "ever-fixed mark," the North Star to explain the sureness of love. The North Star does not change wherever you are. This image would be more familiar to the Elizabethan reader, who understands the importance of using the North Star as a navigational aid during storms. ...read more.

The persona begins to tell us how long he would spend meticulously flattering each of her features which sounds to me almost ridiculous, "A hundred years to praise Thine eyes and on thy forehead gaze; Two hundred to adore each breast But thirty thousand to the rest;" The last thing he mentions is her heart, this is in an attempt to show that he does not just want her in bed, but I think his "mistress" would know better. He believes she deserves such extravagant praise but he then suddenly introduces rather cunningly the idea of payment, "Nor would I love at a lower rate." In the second stanza the pace begins to quicken, as he gives his mistress the final argument. That is, that they don't have all the time in the world but rather "Time" is racing quickly and they must act with haste, Times winged chariot hurrying near; And yonder all before us lie Vast deserts of eternity." He does not talk about the eternal quality of love as in Shakespeare's poem. "Love is times fool without doubt." We can see how this poem differs from traditional courtly love, because all this man wants is sex whereas courtly love remains decidedly unrequited. ...read more.

This is very sentimental by my way of thinking. Again in the third stanza we find of soft gentle imagery, The flowers, the bed of snow but he is still confused as instead of bed of flowers and winter snow he mixes up these two images, "Are flowers the winter's choice? Is loves bed always snow? This gives the impression that he is so taken in by this woman that he is confused. We also learn that the poet believes that this magnificent woman can sense his admiration, "She seemed to hear my silent voice and love's appeal to know." However he concludes by telling us that he has lost his heart to this woman and will be forever fixated on her as the image of his first love. The three poems show different views of love or partnership. Shakespeare looks at everlasting true love while Marvell uses the tradition of courtly love to demonstrate his argument for sexual pleasure and Clare presents a sad picture of a disappointing first love which is not returned with the same passionate intensity that the young man feels. All are challenging and interesting for the reader and even after all this time can still be related to modern day situations. ...read more.