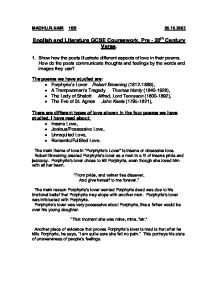 Show how the poets illustrate different aspects of love in their poems. How do the poets communicate thoughts and feelings by the words and images they use?

MADHU.R.NAIR 10B 30.10.2002 English and Literature GCSE Coursework, Pre - 20th Century Verse. 1. Show how the poets illustrate different aspects of love in their poems. How do the poets communicate thoughts and feelings by the words and images they use? The poems we have studied are: * Porphyria's Lover Robert Browning (1812-1889), * A Trampwoman's Tragedy Thomas Hardy (1840-1928), * The Lady of Shalott Alfred, Lord Tennyson (1800-1892), * The Eve of St. Agnes John Keats (1795-1821), There are different types of love shown in the four poems we have studied, I have read about: * Insane Love, * Jealous/Possessive Love, * Unrequited Love, * Romantic/Fulfilled Love. The main theme of love in "Porphyria's Lover" is insane or obsessive love. Robert Browning created Porphyria's lover as a man in a fit of insane pride and jealousy. Porphyria's lover chose to kill Porphyria, even though she loved him with all her heart. "From pride, and vainer ties dissever, And give herself to me forever." The main reason Porphyria's lover wanted Porphyria dead was due to his irrational belief that Porphyria may elope with another man. Porphyria's lover was infatuated with Porphyria. Porphyria's lover was very possessive about Porphyria, like a father would be over his young daughter. "That moment she was mine, mine, fair." Another piece of evidence that proves Porphyria's lover is mad is that after he kills Porphyria, he says, "I am quite sure she felt no pain." ...read more.

Here are few: The L of Shalott was forbidden to look out onto Camelot, so she must look into the mirror to catch a glimpse of Camelot. "Mirror's magic". Lancelot had to be seen as a tidy, flawless character who regularly cleaned his armour, sword, and shield. Every time Lancelot moved, he had to make a noise to get attention, so all eyes were on him. "His armour rung." We have also studied a fourth poem called, "The Eve of St. Agnes". The main theme of love shown in this poem is satisfied and romantic love. I found this poem very interesting and passionate. I especially liked the idea of how Porphyro made The Eve of St. Agnes come true for Madeleine. To conclude my coursework I'd like to say that there are different aspects of love shown in these four poems, but they all link together somewhere. "A Trampwoman's Tragedy" showed how a man could be jealous and protective over his partner, while in "Porphyria's Lover" shows how a person could be so insane, he becomes too overprotective and obsessed over his girlfriend. "The Eve of St. Agnes" ends on a much happier note, where two people love each other deeply, and escape together. However, "The Lady of Shalott" ends tragically, and she only escapes to her death. People believe love has only one true meaning (like a tree with one trunk), where a person has strong likings towards another. Then again, reading these poems have spread out the branches into different aspects and meanings of love. ...read more.