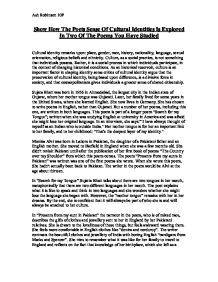 Show How The Poets Sense Of Cultural Identities Is Explored In Two Of The Poems You Have Studied Cultural identity remarks upon: place, gender, race, history, nationality, language, sexual orientation, religious beliefs and ethnicity. Culture, as a social practice, is not something that individuals possess. Rather, it is a social process in which individuals participate, in the context of changing historical conditions. As an historical reservoir, culture is an important factor in shaping identity some critics of cultural identity argue that the preservation of cultural identity, being based upon difference, is a divisive force in society, and that cosmopolitanism gives individuals a greater sense of shared citizenship. Sujata Bhatt was born in 1956 in Ahmedabad, the largest city in the Indian state of Gujarat, where her mother tongue was Gujarati. Later, her family lived for some years in the United States, where she learned English. She now lives in Germany. She has chosen to write poems in English, rather than Gujarati. But a number of her poems, including this one, are written in both languages. This poem is part of a longer poem "Search for my Tongue"; written when she was studying English at university in America and was afraid she might lose her original language. ...read more.

The writer then tries to imagine what that world might be like back in Pakistan. In "Search for my Tongue" The poem is written in three sections. In the first section the poet expresses how hard it is for her to know two languages, but neglect the one she feels most belongs to her. She then explains these ideas in Gujarati. She then translates her thoughts for us into English showing that although her "mother tongue" dies during the day, it "grows back" in her dreams at night, becoming strong and producing "blossoms". "Presents from my aunts in Pakistan" is written in free verse meaning the phrases are arranged loosely across the page. It is divided into stanzas of varying length. When there is no set pattern to a poem, the writer can always break a line to create emphasis. In "Search for my Tongue" the poet plays around with the different definitions for the word tongue. The tongue is a part of the body - the part you speak with but it has also come to mean the language that you speak. The phrase "lost my tongue" is used in a colloquial sense to mean that someone is tongue-tied and does not know what to say. ...read more.

She realises that all this is part of her own family's past, and another side of her identity. At the end of the poem, she tries to imagine how it might have been if she'd lived in Lahore instead, and wonders would she have been more or less at home in the other half of her background. The Gurajati in "Search for my Tongue" is translated into phonetic English underneath perhaps proving her mastery of both languages, English and Gurajati. This shows how the two tongues in her mouth fit together and without Gurajati the poem wouldn't have the same effect. The narrator imagines herself "there" in Lahore somewhere she has been only in her thoughts. However, she is "of no fixed nationality". This sounds a slightly threatening phrase. There's a similar phrase "of no fixed abode" which is used in law courts when the defendant is homeless.. The speaker imagines herself staring "through fretwork" at the beautiful Shalimar Gardens. This is such an effective image to end on as it gives the impression that the narrators sees the beauty of her home country and a sense of longing for where she believes she belongs. This final image in the poem carries a particular significance as it's the one the imagination is left with. Ash Robinson 10F ...read more.