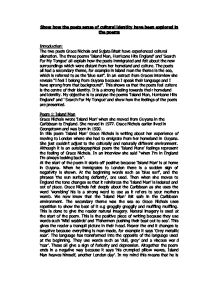 Show how the poets sense of cultural identity have been explored in the poems Introduction: The two poets Grace Nichols and Sujata Bhatt have experienced cultural alienation. The three poems 'Island Man, Hurricane Hits England' and 'Search For My Tongue' all explain how the poets immigrated and felt about the new surroundings which were distant from her homeland and culture. The poets all had a secondary theme, for example in island man the theme is the sea, which is referred to as the 'blue surf'. In an extract from Graces interview she reveals ''I feel I belong from Guyana because I speak their language and I have sprung from that background''. This shows us that the poets feel culture is the centre of their identity. It is a strong feeling towards their homeland and identity. My objective is to analyse the poems 'Island Man, Hurricane Hits England' and ' Search For My Tongue' and show how the feelings of the poets are presented. Poem 1: Island Man Grace Nichols wrote 'Island Man' when she moved from Guyana in the Caribbean to England. She moved in 1977. Grace Nichols earlier lived in Georgetown and was born in 1950. In this poem 'Island Man' Grace Nichols is writing about her experience of moving to London where she had to emigrate from her homeland in Guyana. ...read more.

Its not a home its a place. Poem 2: Hurricane Hits England. In 'Hurricane hits England', Grace Nichols shows how the hurricane of 1987 made her feel at home. Before it hit she felt as if London was just a place. During her stay in England a hurricane hit. This made her feel at home because of the frequent hurricanes, which hit in the Caribbean. This hurricane in England is important to her and is a part of Grace due to the fact that it woke her dormant culture. She felt joyful at home and welcomed to now live in London. At the beginning of the poem the first paragraph is written in the third person. This is done deliberately to show how she is now herself and has changed. The biggest clue towards this is ' It took a hurricane to bring HER closer'. Nearer the end of the first paragraph it personifies her culture when it states 'Her culture appears like some dark ancestral spectre'. In my head this sounds as if her culture has come to haunt her like a family ghost. Just after that line it says 'fearful but reassuring'. This is a paradox as she contradicts herself. She is scared but at the same time it also makes her feel better. Unlike 'Island Man' when it gets to the end it turns positive. ...read more.

This is shown hen she wrote, 'you ask me what I mean when I say I have lost my tongue'. The first section has negative language by using words such as 'lost, foreign, rot', and that she 'spits it out'. Nearer the end it changes to a positive poem as she uses words like 'bud, grows longer grows moist, grows strong veins', referring to her culture. When it changes positive it is the part of the poem where her mother tongue and culture return as she does not feel culturally alienated anymore. Like Grace Nichols, Sujata Bhatt has also used natural imagery top represent her feelings such as tongues. The phrase 'two tongues in your mouth' has strong imagery and it makes you imagine what it would be like in the poets place. Conclusion of 'Island Man', Hurricane Hits England and 'Search For My Tongue'. Overall both of the poets use natural imagery. This goes to show that both are used to nature and not man made buildings. Out of all of the poems my favourite successful device used was the extract in 'Search for My Tongue', where Sujata Bhatt puts you in her position. At the end of 'Hurricane Hits England' and 'Search for My Tongue', the poets have found their culture. This is different to'Island Man' as he does not find out his true culture. Sujata Bhatt's poem is (in my eyes) the most original poem as she challenges the reader. ...read more.