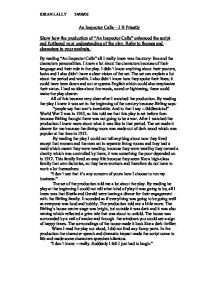 Show how the production of &quot;An Inspector Calls&quot; enhanced the script and furthered your understanding of the play. Refer to themes and characters in your analysis.

An Inspector Calls - J B Priestly Show how the production of "An Inspector Calls" enhanced the script and furthered your understanding of the play. Refer to themes and characters in your analysis. By reading "An Inspector Calls" all I really knew was the story- line and the characters personalities. I knew a lot about the characters because of their language and their role in the play. I didn't know anything about their posture, looks and I also didn't have a clear vision of the set. The set can explain a lot about the period and wealth. I also didn't know how they spoke their lines; it could have been down and out or queens English which could also emphasize their status. I had no idea about the music, sound or lightening, these could make the play clearer. All of this became very clear after I watched the production. By reading the play I knew it was set in the beginning of the century because Birling says: "people say that war's inevitable. And to that I say - fiddlesticks!" World War 2 was in 1945, so this told me that this play is set before then because Birling thought there was not going to be a war. After I watched the production I knew more about what it was like in that period. The set made it clearer for me because the dining room was made out of dark wood which was popular at the time in 1912. By reading the play I could not tell anything about now they lived except that women and the men sat in ...read more.

He is quite an important character in the play; if he was not in the play the audience would have thought Mr and Mrs Birling were only inconsiderate and opinionated because of their old age. Gerald shows this is not true. When Mr Birling says that he did the right thing to sack Eva, Gerald agrees and says: "I should say so!" Eva's death does not really seem to effect Gerald either. J B Priestley might have also put Gerald in because he is liar, as he lied to Sheila. He said he did not come near her because of his work, but later it came out that he was spending time with Eva secretly. So J B Priestley might be telling the audience not to lie, as it does not get you anywhere, whatever you did wrong you cant change as its always going to be your responsibility. J B Priestley also got his message across by putting Mrs Birlings attitude the way it is: "I'm very sorry. But I think she had only herself to blame." Replied Mrs Birling, sure that she had done nothing wrong. In the production when she said this line she sounded very stubborn and cold hearted. When she said this line she did exactly all this to show she's not guilty: Eric seems to be a care-free guy, who could not care less about anything, this might have been caused because nobody really bothered about him. He did so many things wrong, but walked around like nothings happened. ...read more.

This is because the aim for him was for the audience to remember to take responsibility for their actions, not to shift the blame on to others. This is exactly what Mr and Mrs Birling are doing as they are not taking the responsibility for Eva's death. The whole play is about responsibility, even at the beginning Mr Birling has a long talk about being responsible and then before the inspector leaves he then talks about being responsible. Not only did the characters make the play clear at the production, but so did the music and sounds. The play started with a loud air raid siren, when the curtains flew up the siren stopped and some music came on, this was at the same time as you could hear the family's laughter and speech. This made me realise right from the beginning that this is going to be a happy family having a good time. This bit of the play is not in the play (book) so it was easier to understand what was happening as the sound and music made it clear. When the Inspector came, there was no music; I think this was because it was too show there was an intense atmosphere. The sound and music affected the play a lot. Overall the production helped me to understand the play a lot more. The acting skills of the characters made it easier for me to follow. J B Priestley's aim came round a lot clearer as well; this was also because of the acting skills of the actors to show how to behave and how not to behave about taking responsibility. KIRAN LALLY 24/08/03 ...read more.