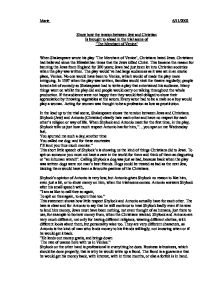 Marie 6/11/2002 Show how the tension between Jew and Christian Is brought to ahead in the trial scene of 'The Merchant of Venice' When Shakespeare wrote his play 'The Merchant of Venice', Christians hated Jews. Christians had believed since the Elizabethan times that the Jews killed Christ. This became the reason for banning the Jews from England for 300 years; Jews had just been let into Christian societies when the play was written. The play would've had large audiences as it was set in an exotic place, Venice. No one would have been to Venice, which would of made the play more intriguing. In 1597 when the play was written, families would visit the theatre regularly; people loved a bit of comedy so Shakespeare had to write a play that entertained his audience. Many things went on whilst the play did and people would carry on talking throughout the whole production. If the audience were not happy then they would feel obliged to show their appreciation by throwing vegetables at the actors. Every actor had to be a male so a boy would play a woman. Acting for women was thought to be a profession as low as prostitution. In the lead up to the trial scene, Shakespeare shows the tension between Jews and Christians. ...read more.

Shylock even uses this hold he has on Antonio to relieve himself of the anger he had, after his daughter left taking some of his money and Jewels with her to marry a Christian. "....If a Jew wrong a Christian, what is humility? Revenge. If a Christian wrong a Jew, what should his sufferance be by Christian example? Why, Revenge! As the trial scene starts you are given a clear indication that Shylock is hated, even the Duke (judge) is against him. "A stony adversary, an inhuman wretch, Uncapable of pity, void and empty From any dram or mercy." When the Duke says this you get a clear picture of him walking over to a table saying it softly to himself, shaking his head and with the audience of this time very much agreeing. As every one is settled in the courtroom waiting for Shylock to enter the tension would have been immense, everyone staring at the door, looks of disgust on their faces. When Shylock finally enters the message is clear that the Christians want Shylock to show mercy and would rather take the pound of flesh from him than Antonio. "....Thou'lt show thy mercy and remorse more strange than is thy strange apparent cruelty." All of Antonio's friends would be at the side like a jury but allowed to get up and say what they thought of ...read more.

"O Jew, an upright judge, a learned judge!" The audience watching would've found the disappointment of the Jew quite amusing and reacted with an outburst of laughter. Shylock would now want to get out of the situation as easy as he could, obviously knowing the Christians would want to drain him of everything he owns to get their revenge. Portia is constant to keep the Jew in the court and give him what they think as reasonable justice. The end of the trial scene would be most favoured throughout all the Christians as their hate for Jews would be shown in the way Shylock ended up with most of his belongings taken from him or destine to be given away once he dies. When Shylock leaves the court being told he must convert to become a Christian, the audience watching the play when it was first written would of accepted this but today people would feel sorry for him. Knowing a Jews religion is the most important to them. Throughout the play Antonio is put across as a sad character and at the end of the trial scene I think Antonio will be looking pleased with himself making it obvious he was scared of death. Overall I think the tension in the trial scene is show by giving the play such a plot as Portia being the judge, knowing or not knowing what will happen. ...read more.