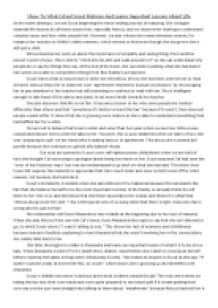 ﻿Show To What Extent Scout Matures And Learns Important Lessons About Life As the novel develops, we see Scout beginning the never ending process of maturing. She is taught essential life lessons by all those around her, especially Atticus, and we observe her starting to understand complex issues and how other people feel. However, we also witness her many immature actions, for instance her reaction to Walter?s table manners, which remind us that even though she has grown she is still just a child. Atticus teaches her early on about the importance of empathy and seeing things from another person?s point of view. She is told to ?climb into his skin and walk around in it? so she can understand why people do or say the things they say. At the end of the book, she succeeds in putting what she had learnt into action as is able to comprehend things from Boo Radley?s perspective. Scout learns what a compromise is when she tell Atticus of how she has been ordered not to read at home. Atticus helps her to make her own ?agreement reached by mutual concessions? by encouraging her to pay attention to her teacher but still promising to continue to read with her. She is intelligent enough to take heed of this advice and starts to act more kindly towards her teacher. ...read more.

But later she begins to relate to Alexandra and learns an important lesson of what it is to be a true lady. When Alexandra is told of Tom?s death she is shaken, nevertheless she is able to recompose herself before rejoining the ladies in Maycomb?s Missionary Society. This makes an impact on Scout as she says ?If auntie could be a lady at a time like this, so could I? which shows she is growing up and identifies with Alexandra. Scout?s childish innocence is obvious at the mob incident outside the jail. The mob were intent on taking the law into their own hands and were quite prepared to see blood spilt if it meant getting their own way yet she just went straight into talking to them about ?entailments? because Atticus had told her it was a ?polite thing to talk to people about what they were interested in.? She lacks the maturity to understand that they haven?t come for small talk but to potentially kill an innocent man. At the beginning of the novel, Scout started fights at the slightest provocation but after Atticus tells her to ?fight with your head, not with your fists? we see her resist the temptation to beat people up. It?s particularly impressive when she even refrains from punching those that call her father a ?nigger lover? at school because it shows she has learnt tolerance and has began to grow up. ...read more.

She finally understands what Atticus taught her about prejudicing when she meets Boo Radley. At first, she didn?t recognise Boo because, despite never seeing him before, she had a preformed image in her mind based on rumours and gossip. This marks the time where she no longer perceives Boo as a ?malevolent phantom? but as a real person and begins to call him ?Mr Arthur? which indicates that she now appreciates that you can?t judge someone you have never met. Towards the end of the novel, Scout?s conscience develops as she matures and she recognises the cruelty she inflicted on Boo when she played those games. She felt a ?tinge of remorse? when she realised how much they must have tormented him and regrets taking the presents he left them and not giving anything in return. This, in my opinion, marks her biggest step towards growing up because she stops being so self-centred and acknowledges the feelings of others. Looking at all the evidence I think that it is accurate to come to the conclusion that Scout learns many indispensable lessons about life during her childhood, all of which contribute to her progress along the road of maturation. Yet we also observe her juvenile traits that she continues to hold onto. I feel this slightly undermines the progress she has made and highlights that she does still have a long way to go before she can be called a lady and not a little girl. ...read more.