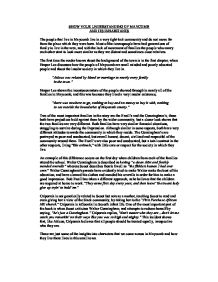 Show Your Understanding of Maycomb and Its Inhabitants.

SHOW YOUR UNDERSTANDING OF MAYCOMB AND ITS INHABITANTS The people that live in Maycomb live in a very tight-knit community and do not move far from the place which they were born. Most of the townspeople have had generations of family to live in the area, and with the lack of movement of families the people who marry each other start to look more similar as they are distant and sometimes close relatives. The first time the reader knows about the background of the town is in the first chapter, when Harper Lee discusses how the people of Maycomb are small minded and poorly educated people and about the insular society in which they live in. ...read more.

Both families have very similar financial situations, struggling to survive during the Depression. Although similar in some aspects, both have very different attitudes towards the community in which they reside. The Cunningham's are portrayed as poor and uneducated, but overall honest, decent, civilised and respectful of the community around them. The Ewell's are also poor and uneducated, but a total contrast in the other respects, living "like animals," with little care or respect for the society in which they live. An example of this difference occurs on the first day when children from each of the families attend the school. Walter Cunningham is described as having "a clean shirt and freshly mended overalls" whereas Scout describes Burris Ewell as "the filthiest human I had ever seen." ...read more.

Scout but acts as a mother, teaching Scout to read and even giving her a view of the black community, by taking her to the "First Purchase African ME church." Calpurnia is influential in Scout's infant life. One of the most important part of the book is when Scout criticises Walter Cunningham, and attempts to redeem herself by saying, "he's just a Cunningham." Calpurnia replies, "don't matter who they are...don't let me catch you remarkin' on their ways like you was so high and mighty." This incident shows that, like Atticus, Calpurnia believes that all people should be treated equally, irrespective who they are. These are just some of the insights into characters that we come across in Maycomb and how they live there lives in this small town. ...read more.