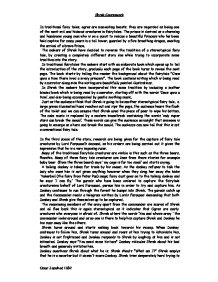 In traditional fairy tales, ogres are man-eating beasts; they are regarded as being one of the most evil and hideous creatures in fairytales. The prince is derived as a charming and handsome young man who is on a quest to rescue a beautiful Princess who has been held captive for many years in a tall tower, guarded by a fire breathing dragon, awaiting the arrival of a brave Prince. The makers of Shrek have decided to reverse the tradition of a stereotypical fairy tale, by creating a completely different story line while trying to incorporate some tradition into the story. In traditional fairytales the makers start with an elaborate book which opens up to tell the introduction of the story, gradually each page of the book turns to reveal the next page. The book starts by telling the reader the background about the fairytale "Once upon a time there lived a lovely princess". The book contains writing which is being read by a narrator along side the writing are beautifully painted illustrations. In Shrek the makers have incorporated this same tradition by including a leather binded book which is being read by a narrator, starting off with the words 'Once upon a time', and also being accompanied by gentle soothing music. Just as the audience think that Shrek is going to be another stereotypical fairy tale, a large green illuminated hand reaches out and rips the page, the audience hears the flush of the toilet and we can assume that Shrek used the piece of paer to wipe his bottom. The calm music is replaced by a modern soundtrack containing the words 'only super stars can break the mould'. These words can give the audience an insight that someone is going to emerge as a hero and break the mould. The audience can now tell that this is not a conventional fairy tale. ...read more.

After this scene has ended Shrek and Donkey arrive in Duloc to see Lord Farquaad. On seeing Shrek a man dressed up in a costume of Lord Farquaad runs away from Shrek and runs into a wall knocking himself out. This is stereotypical of a fairy tale as people are scared of Ogres. As both Shrek and Donkey delve further and further into Duloc the town seems uninhabited until they hear the sound of trumpets. By following the sound they enter a courtyard in which Lord Farquaad is giving a speech to the knights telling them that they are going to have a tournament to see who is the strongest. The strongest one will then embark on a qust to save Princess Fiona. Lord farquaad uses this sentence 'Many of you will die, but it is a sacrifice I am willing to take.' This is not stereotypical as it is normally the Prince or in this case the Lord himself who would go and rescue the Princess he wouldn't send others on his behalf. This again shows that Farquaad is not the stereotypical Prince as he should be couragous. Shrek enters the courtyard and shouts at Farquaad demanding his swamp back. Some humour is exchanged which is not normally visible in fairy tales. Farquaad refuses to give Shrek his swamp back and tells the Knights that the one who kills the ogre will be the one embarking on the quest to rescue Princess Fiona. A stereotypical fight from a fairy tale would involve people fighting one another with swords. However this is not the case in Shrek as a modern sound track cuts in and Shrek jumps into a wrestling ring and starts preforming wrestling moves pn the Knights that try to kill him. Donkey also helps from outside the ring headbutting people etc. After Shrek has knocked out all of the Knights the crowd cheer him and again humour is exchanged betwwen characters. ...read more.

The guards begin to capture both Shrek and Fiona however as traditon is followed in the next few events. Love, good overcome the struggle and beat evil. Farquaad is eaten by the dragon who is in love with Donkey this is again stereotypical as good overcomes evil and the bad is always killed or got rid off at the end of the film. As Shrek kisses Fiona she takes her true form of beauty. Traditionis again reversed as trhe beuty would have been in her Human form but it is changed to the ogre form. Shrek and Fiona return to the swamp and have a wedding many of the fairy tale creatures come and Shrek gets his swamp back the ending of the film reverses tradion again as it is not a solemn wedding but one with lots of modern music and dancing etc. The ending of the film is reminiscent of Cinderella as Shrek and Fiona leave for there honeymoon in a carriage made by a onion. Shrek is a great film and has turned the fairy tale traditon upside down it uses modern technology combined with old tradition to produce a great film that has won many oscars and has gained it self credibility along side all the greatest fairy tales. It is slighly different to normal fairy tales changing the tradition slighly. shrek incorporates both tradition and modern technology to take fairy tale stroies to new limits. As a fairy tale Shrek had to be different in some way as fairy tale stroies are growing fast out of date as technology advances. Shrek lived up to its potential and has created a new era of fairy tale stories cxombining both the old with the new. Shrek reverses traditon in some areas but the makers of the film have incorporated new ideas along side with the tradition to keep up with the ever progressing time. Omar Jamshad 10S Shrek Coursework Omar Jamshad 10B2 ...read more.