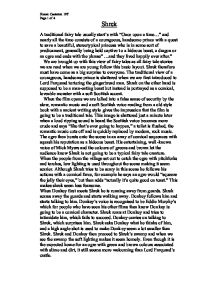 Shrek - how do the makers change the traditional fairy tale?

A traditional fairy tale usually start's with "Once upon a time..." and nearly all the time consists of a courageous, handsome prince with a quest to save a beautiful, stereotypical princess who is in some sort of predicament, generally being held captive to a hideous beast, a dragon or an ogre and ends with the phrase" ...and they lived happily ever after." We are brought up with this view of fairy tales as all fairy tale stories we are read when we are young follow this basic layout. Shrek therefore must have come as a big surprise to everyone. The traditional view of a courageous, handsome prince is shattered when we are first introduced to Lord Farquaad torturing the gingerbread man. Shrek on the other hand is supposed to be a man-eating beast but instead is portrayed as a comical, loveable monster with a soft Scottish accent. When the film opens we are lulled into a false sense of security by the slow, romantic music and a soft Scottish voice reading from a old style book with a ancient writing style gives the impression that the film is going to be a traditional tale. This image is shattered just a minute later when a loud ripping sound is heard the Scottish voice becomes more crude and says "like ...read more.

He then enters the torture chamber surrounded by hooded figures with dark lighting used to make the scene scarier. Lord Farquaad is then shown as being a really ugly diminutive figure as opposed to the traditional tall, handsome prince. He then starts to taunt the Gingerbread man and threatens to rip off the Gingerbread man's gumdrop buttons. After losing patience Lord Farquaad throws the Gingerbread man into a bin. These scenes show Lord Farquaad as being a heartless, evil man. Lord Farquaad dreams of being king, so with purely evil intentions he strives to save the princess, but unlike traditional tales instead of rescuing her himself sends Shrek to do his evil deed. As Shrek and Donkey approach Lord Farquaad's castle, the camera moves from ground level upwards. This is called a high angle shot which gives the feeling Shrek and Donkey are just two tiny people approaching a castle towering over them, illustrating the magnitude of the quest ahead. As Shrek enters the castle of Duloe they end up on a more Traditional quest of rescuing the princess from the dragon, with the ultimate aim of recouping his swamp. As they set out on their new quest they are pictured walking through fields, with the sun shining down on them. ...read more.

It comes as a great relief when the dragon eats the king and we feel justice has been done. At that moment, Shrek and Princess Fiona finally share true loves' first kiss; Princess Fiona then starts to float and then takes "loves' true form." A brilliant light shines giving the impression that good has conquered evil. It can be seen therefore that the story of Shrek uses presentational devices to reverse our expectations, so that by the end of the film the audience feels happy for Shrek, the unlikely hero, by presenting him as the loveable good guy. The audience feels hatred towards Lord Farquaad his evil; merciless actions make him disliked by everyone. The layout of the film makes it very successful as well as the fact that it was aimed to appeal to all ages. Some of the jokes in the film are clearly aimed at adults, as they would pass over a young child's head. At the end of the film, even though it pushes the boundaries of a traditional fairy tale, it does have all the right ingredients; - it has a prince, princess, an ogre and finally a noble stead. The only difference is the fact that all their roles have been reversed with the prince being evil and the ogre being the good guy and ends with the right couple living "happily ever after." Kieran Casterton 10T Page 1 of 4 Shrek ...read more.