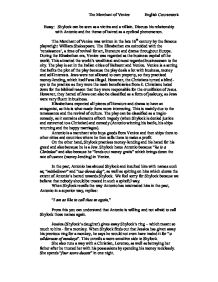 Shylock can be seen as a victim and a villain. Discuss his relationship with Antonio and the theme of hatred as a cyclical phenomenon.

Essay: Shylock can be seen as a victim and a villain. Discuss his relationship with Antonio and the theme of hatred as a cyclical phenomenon. The Merchant of Venice was written in the late 16th century by the famous playwright William Shakespeare. The Elizabethan era coincided with the 'renaissance', a time of revival for art, literature and drama throughout Europe. During the Elizabethan era, Venice was regarded as the business capital of the world. This attracted the world's wealthiest and most regarded businessmen to the city. The play is set in the Italian cities of Belmont and Venice. Venice is a setting that befits the plot of the play because the play deals a lot with business, money and self-interests. Jews were not allowed to own property, so they practised money-lending, which itself was illegal. However, the Christians turned a blind-eye to the practice as they were the main beneficiaries from it. Christians hated Jews for the biblical reason that they were responsible for the crucifixion of Jesus. However, they hatred of Jews can also be classified as a form of jealousy, as Jews were very fluent in business. ...read more.

This unveils a more sensitive side to Shylock. She also runs a way with a Christian, Lorenzo, as well as betraying her father after he trusted her with his possessions by spending his money recklessly. She spends "four score ducats" in one night. The actions are unfair to Shylock because they are spiteful and hateful. Firstly, the ring was given to Shylock by his presumably late wife Leah. Secondly, Shylock is a steadfast Jew and wouldn't want his daughter running away with a Christian. Finally, Shylock trusts his daughter with his possessions but she betrays him and spends his money recklessly. The readers are likely to feel sorry for Shylock because he is unaware of the fact that his daughter is going to run away with his wealth and betray him. The audience, however, know what is going to happen which creates dramatic irony. In the courtroom, Gratiano is disrespectful and aggressive. He insults Shylock with abusive names such as "inexecrable dog" in an angry tone. This reveals to us the fact that Shylock is a target for all Christian and anti-Semitists and is victimised in the play. ...read more.

This contributes to the theme of hatred as a cyclical as it shows that Christians were happy to see Shylock (a Jew) victimised. Despite all this ill-treatment, Shylock also has an evil side which also makes him a villain. He also contributes to the theme of hate. Shylock hates Antonio so much that he refuses to forgive him. "Cursed be my tribe if I forgive him!" Moreover, he hates him for he is a Christian. From Shylock's attitude you can tell that he hates Christians, especially Antonio. This contributes to the theme of hatred as a cyclical phenomenon as it shows the extent of Shylock's hate towards Antonio. Shylock compares his money to the loss of his daughter. This suggests that Shylock values self-interests over love. Furthermore, Antonio is reluctant in signing the bond, however, Shylock tricks him into thinking that it is a joke, when it is not. Shylock wants the pound of flesh as a form of revenge towards Antonio. "If it will feed nothing else, it will feed my revenge." This exposes Shylock's inhuman and cruel character. "The villainy you teach I will execute, and it shall go hard but I will better the instruction." ?? ?? ?? ?? The Merchant of Venice English Coursework ...read more.