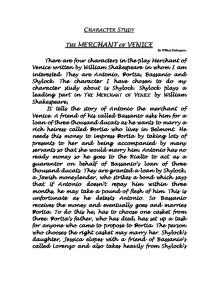 CHARACTER STUDY THE MERCHANT OF VENICE By William Shakespeare There are four characters in the play Merchant of Venice written by William Shakespeare in whom I am interested. They are Antonio, Portia, Bassanio and Shylock. The character I have chosen to do my character study about is Shylock. Shylock plays a leading part in THE MERCHANT OF VENICE by William Shakespeare, It tells the story of Antonio the merchant of Venice. A friend of his called Bassanio asks him for a loan of three thousand ducats as he wants to marry a rich heiress called Portia who lives in Belmont. He needs this money to impress Portia by taking lots of presents to her and being accompanied by many servants so that she would marry him. Antonio has no ready money so he goes to the Rialto to act as a guarantor on behalf of Bassanio's loan of three thousand ducats. ...read more.

I liked Shylock because he plays a different role in the drama from the rest of the characters as the rest have virtuous parts, whereas Shylock has a flagitious part in the play. Shylock is opprobrious alo out and hate-filled towards Christians, especially Antonio, who is a Christian but also has a direct effect on his business. This is clear when he says, " How like a fawning publican he looks! I hate him for he is a Christian; but more for that in low simplicity. He hands out money gratis, and brings down the rate of usance here with us in Venice. If I catch him once apon his hip, I will feed fat the ancient grudge I bare him. " Shylock has especial rancour towards Antonio because Antonio spat on him in front of all his business partners and always humiliates him on the Rialto in Venice. Shylock has a colossal vindictive desire for reprisal. ...read more.

At one point he worries about his daughter. Then he seems to worry more about his ducats. The overall impression we get is that he is worried about his treasury, not his daughter. Overall, I believe I have shown that Shylock is a vengeful and hate - filled character and that he is also mean and miserable. In addiction, he values possessions more than people and he has a strong desire for revenge. Shylock is a unique character in the play. He plays the role of the villain. His character helps to add some interest to the overall plot and construction of the play. If the characters had been all good and had no sign of evil, it would not have gone down well with the audience as it would not satisfy their appetite to see good win over evil. In my opinion, Shylock is a well-created and presented character by Sir William Shakespeare. He creates a general interest in the play for the reader to listen on and find out what fate holds for the evil Shylock. ...read more.