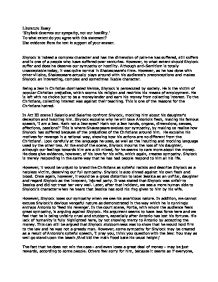 'Shylock deserves our sympathy, not our hostility.' To what extent do you agree with this statement?

Literature Essay 'Shylock deserves our sympathy, not our hostility.' To what extent do you agree with this statement? Use evidence from the text in support of your answer. Shylock is indeed a complex character and has the dimension of pain-he has suffered, still suffers and is one of a people who have suffered over centuries. However, to what extent should Shylock suffer and does he deserve our sympathy or hostility. Although anti-Semitism is totally unacceptable today, it was quite normal in Shakespeare's time. However, as he has done with other villains, Shakespeare actually plays around with his audience's preconceptions and makes Shylock an interesting, complex and sometimes likable character. Being a Jew in Christian dominated Venice, Shylock is persecuted by society. He is the victim of popular Christian prejudice, which scorns his religion and restricts his means of employment. He is left with no choice but to be a moneylender and earn his money from collecting interest. ...read more.

He does give evidence, however, of his love for his wife, which again, creates sympathy. Shylock is merely responding in the same way that he has had people respond to him all his life. However, it would be unjust to brand the Christians as spiteful racists and describe Shylock as a helpless victim, deserving our full sympathy. Shylock is also sinned against his own flesh and blood. Once again, however, it would be a gross distortion to label Jessica as an unfilial, daughter and regard Shylock as the innocent, injured party. It was stated that Shylock was unfair to Jessica and did not treat her very well. Later, after that incident, we see a more human side to Shylock's character when he hears that Jessica has sold his ring given to him by his wife. However, Shylock loses our sympathy when we see his avaricious nature. ...read more.

Others feel sorry for him, because it seems as if everyone, including the just Portia, is against him. Moreover, the punishment meted out to him is rather harsh on several counts. Shylock leaves the play feeling ill and old, having lost everything that makes his life worth living, including his self-esteem, a broken man, we truly feel sorry for him, perhaps because the Christian relish their triumph so much and because we feel in our heart of hearts that Jessica's romance is built on ducats rather than devotion. Ultimately, Shylock loses all our sympathy because his method of revenge is that of cold and calculating murder. He is a villain, but we do have sympathy in his sufferings for much of the play. Shylock is difficult to judge because he is not merely a caricature, even though Shakespeare perhaps meant him to be originally, he is a real person and he is too complex to make facile judgments about. ...read more.