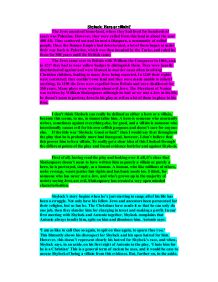 Shylock: Hero or villain? The Jews ancestral home-land, where they had lived for hundreds of years was Palestine. However, they were exiled from this land in about the year 400 AD. They scattered out and formed a Diaspora, a community of exiled people. Once the Roman Empire had deteriorated, a lot of them began to make their way back to Palestine, which was then invaded by the Turks, and ruled by them for 800 years until the British came. The Jews came over to Britain with William the Conqueror in 1066, and in 1217 they had to wear yellow badges to distinguish them. They were heavily discriminated against and were blamed in murder cases often involving Christian children, leading to many Jews being executed. In 1269 their rights were restricted; they couldn't own land and they were made unable to inherit anything. In 1290 the Jews were expelled from Britain and were disallowed for 350 years. Many plays were written about evil Jews. The Merchant of Venice was written by William Shakespeare although he had never met a Jew in his life, he doesn't seem to portray Jews in his play as evil as a lot of them in plays in his time. I don't think Shylock can really be defined as either a hero or a villain, because this seems, to me, to immortalise him. ...read more.

And in this moment he seems so much of a villain that it is hard to consider the other side of the argument. But, if you use empathy and think about how you would feel if your wife had died, your daughter and your servant had left you, your daughter had taken all of your wealth, and you had been slandered all your life for your religion and race, you would probably be a bitter and unfeeling person too. I don't think that this means Shylock isn't a villain or is right to say that in any way, but I believe he has been provoked into this state of mind, and has the reasons to be this way. In terms of his household and family life, I think Shylock is a villain, but not necessarily without reason. Shylock's attitude to money is obsessive and greedy, I think he is naturally like that, but this has been worsened by the way that he ahs been deprived of it. He is only able to do one form of work, and if that means charging high interests then so be it. He doesn't feel guilt or have a stab of conscience when he makes Christians pay back the money and more because of the way he's been treated by them. ...read more.

He's grown to act independently, selfishly and for his own means. In conclusion, I think that Shylock is a selfish and greedy person, and more of a villain than a hero. But all of his actions were provoked, and he was just coping with situations that were forced upon him, that he was generally out of control of and he had to deal with them in a way that he thought would be best. I think he has been unwilling to be in his life situation throughout the play, and so just acted in a way that would help him the most. Through all of the bullying from the Christians, who seemed determined not to stop until he had nothing left, he sought revenge, and the bond he casually agreed upon with Antonio gave him the perfect opportunity. If you look in depth at the behaviour of everyone in The Merchant of Venice, Shylock is not the only villain in it. The behaviour of the Christians is malicious and shocking, and clears Shylock of his unfeeling behaviour, giving him the perfect reason. He is naturally a selfish person, but not really a villain. He just had to stop people discriminating against him in any way he felt necessary. The question, "Is Shylock a hero or a villain?" is a one-dimensional question being asked of a three-dimensional character. ...read more.