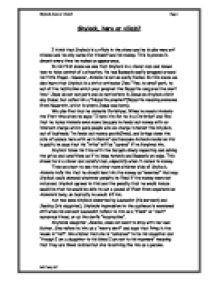 Shylock, hero or villain? I think that Shylock is a villain in the story and he is also very evil minded and he only cares for himself and his money. This is proven in almost every time he makes an appearance. In his first scene we see that Shylock is a clever man and knows how to take control of a situation. He has Bassanio easily wrapped around his little finger. However, Antonio is not so easily fooled. In this scene we also learn that Shylock is a strict orthodox Jew; "Yes, to smell pork, to eat of the habitation which your prophet the Nazarite conjured the devil into." Jews do not eat pork and do not believe in Jesus so Shylock didn't say Jesus, but called him a "Nazarite prophet"(Nazarite meaning someone from Nazareth, which is where Jesus was born). We also find that he detests Christians. When he meets Antonio the first time when he says; "I hate him for he is a Christian" and find that he hates Antonio even more because he lends out money with no interest charge which puts people who do charge interest like Shylock, out ...read more.

He tells Jessica that he is going to the feast in hatred because he knew the others wouldn't expect him to come. He also tells her that while he's out she is not to open any of the windows and look at the masques and "the vile squealing of the wry-necked fife" and "gaze at the Christian fools". He adds the fact that his house is "sober". His lack of concern for Jessica and love for his money show at the end of the scene when he says "shut doors after you - fast bind, fast find" which means that if something is shut securely then it will be like that when you return. Shylocks reaction to this is described in scene eight in a conversation between Salerio and Solanio. They chat about how they have never before seen a man with "passion so confused" meaning such a mixture of angry outbursts. They said that he was crying; "My daughter! O my ducats! Fled with a Christian! O my Christian ducats! Stolen by my daughter! ...read more.

So now he has to actually become a Christian, and you can imagine how bad this is for Shylock because he hates Christians. What's more, he has to give half his money to Antonio, his worst enemy. From this we see a different Shylock, he actually wants to die rather than do this. He leaves the courtroom sad and pathetic. In this story, you would judge from Shylocks thoughts and actions that he would be an evil, mean villain. But if you look at the actual story line Shylock could be seen as a hero. Just think, that if it wasn't for Shylock, Portia and Bassanio may never have met because Shylock gave him the money to actually go to Portia. Without that, the court case would not of happened and Portia, Bassanio, Antonio and all the others would not have been united as friends after the court scene. So Shylock is the hero and villain in the story and he is probably most described character as the whole story basically revolves around him. Shylock, hero or villain? Page 1 Jed Carey 4C ...read more.