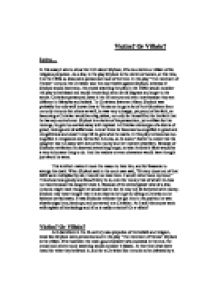 Shylock, if he is a victim or villain of his religious prejudice. The Merchant of Venice

Victim? Or Villain? Intro... In this essay I aim to show the truth about Shylock, if he is a victim or villain of his religious prejudice. As a Jew, in the play Shylock is the victim of racism, at this time, it is the 1500s so Jews were persecuted most of the time. In the play "The merchant of Venice" Antonio the Christian won the court battle against Shylock, whereas if Shylock would have won, the crowd watching the play in the 1500s would consider the play to be biased and would throw food as an act of disgrace and anger to the actors. Christians persecuted Jews in the 16-century and even now because they are different in lifestyles and beliefs. To Christians Jews are Aliens. Shylock was probably the only well known Jew in Venice so he got a lot of Anti-Semitism from not only Antonio but others as well, he was very unhappy, yet proud of his faith, so becoming a Christian would be a big defeat, not only for himself but for his faith that he has any control over. Shylock is a victim of his persecution, yet a villain for his revenge, he gets too carried away with reprisal. A Christian stereotype of a Jew is of greed, revenge and of selfishness. And at times he becomes too engulfed in greed and vengefulness and doesn't stop till he gets what he wants. In this play he becomes too engulfed in vengeance and hatred for Antonio, so he doesn't bother to notice that his daughter has run away with lots of his money and her mothers jewellery. ...read more.

Shylock suffers mental torment because he is always confused by what he is going to do, and the aftermath is usually in Antonio's advantage, by Shylock becoming too self centred and vengeful towards Antonio and other Christians. The three witches in Macbeth told him he would be the king, Shylock had a vague idea of that, he pounced on Antonio when he least expected it, it was very effective, behind Antonio's back he planned it. Luckily Portia and Bassanio saved Antonio. Shylock has had the desire to do evil since the beginning of the play and has focused his attention on Christians in particular. The desire to do wicked things probably started because he had been persecuted for so long, he thought it was 'payback'. When Shylock "If it will feed nothing else, it will feed my revenge!" This quote proves how greedy and manipulative he is. "If you prickle us, do we not bleed? If you tickle us do we not laugh? If you poison us do we not die? And if you wrong us, shall we not revenge?" This quote that Shylock says is saying that Jews or any other race/religion are not any different to anyone else, a quote like this would have made anyone question themselves to what they are going to say next in reply to it. Shylock asides and soliloquies because he wants the audience to feel his emotions of anger or dismay. Also trying to get the audience to see through the bad in him, showing he can be a good, gentle person. ...read more.

It was not fair that he was fighting the whole of Venice on his own to stay alive. So, to be fair he did deserve to have revenge, but the idea he had in mind, was going to cost him, a lot! Antonio should have not got away with everything; Shylock should have at least been left with some pride (his religion). Shylock the way he did in self-defence, therefore he was right to do so, it was for his own protection and of his faith. But, he became too egotistical and tried to push his luck by trying to kill Antonio, by doing it he jeopardised his life and it cost him. Many people would conclude that Shylock got what he deserved but it was not his fault. We are all human; we are at some time greedy and vengeful. Shylock only wanted to have a life and to have a life. But Antonio was sick of him and took advantage of this. Certain things lead to another, if Shylock had not lent Antonio the money, Portia would not have married Bassanio, and beet Shylock in the court case, however Shylock would not have been able to rid himself of Antonio, though shylock would still be a Jew otherwise. So really if it had been the other way round Shylock would have been better off. And Bassanio would not have been able to go to Belmont and marry Portia, so to Shylock it would have been an advantage, and he would have left Bassanio in dismay, if I were Shylock (a Jew) I would be happy with that. ...read more.