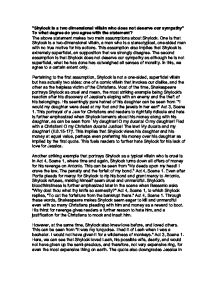 &quot;Shylock is a two dimensional villain who does not deserve our sympathy&quot; To what degree do you agree with the statement?

"Shylock is a two dimensional villain who does not deserve our sympathy" To what degree do you agree with the statement? The above statement makes two main assumptions about Shylock. One is that Shylock is a two-dimensional villain, a man who is a stereotypical, one-sided man with no true motive for his actions. This assumption also implies that Shylock is extremely superficial, an supposition that we strongly disagree. The second assumption is that Shylock does not deserve our sympathy as although he is not superficial, what he has done has outweighed all senses of morality. In this, we agree to a certain extent only. Pertaining to the first assumption, Shylock is not a one-sided, superficial villain but has actually two sides: one of a comic villain that invokes our dislike, and the other as the helpless victim of the Christians. Most of the time, Shakespeare portrays Shylock as cruel and mean, the most striking example being Shylock's reaction after his discovery of Jessica's eloping with an enemy and the theft of his belongings. His seemingly pure hatred of his daughter can be seen from `"I would my daughter were dead at my foot and the jewels in her ear!" Act 3, Scene 1. This portrayal of a Jew for Christians and readers to rightfully ridicule and hate is further emphasized when Shylock laments about his money along with his daughter, as can be seen from `My daughter! O my ducats! O my daughter! Fled with a Christian! O my Christian ducats! Justice! The law! My ducats and my daughter! (II.8.15-17)'. This implies that Shylock views his daughter and his money at equal value, perhaps even preferring his money over his daughter as implied by the first quote. This fuels readers to further hate Shylock for his lack of love for Jessica. Another striking example that portrays Shylock as a typical villain who is cruel is in Act 4, Scene 1, where time and again, Shylock turns down all offers of money for his revenge on Antonio. ...read more.

Act 4, Scene 1. As can be seen, he had already lost his money and his daughter, but at the end of the court scene, his fortune is given to the Christian with whom his daughter had eloped with, and he also loses his religion, which he values more highly than money, as can be seen when he decided that revenge was more important than reclaiming the ducats from Bassanio. He also loses his dignity, as can be seen from "Down therefore, and beg mercy of the Duke." Act 4, Scene 1. Shylock came into court, expecting to walk away with his shame avenged but ends up losing everything, including his religion and his dignity, and his very life itself, as as Shylock says, a meaningless life is not worth living. This can be seen from, "Nay, take my life and all...You take my life when you do take the means whereby I live." Act 4, Scene 1. However, he is ignored and he loses everything while the `hero' of the story, Bassanio, ends up with riches, a beautiful wife and his enemy dead. His portrayal as the helpless victim who can say nothing more but "I am content." Act 4, Scene 1, in defeat and resignation, causes readers to feel pity for him. Another reason why Shylock is deserving of pity is the fact that he has no friends, whereas Antonio seems to have so many who try to comfort him when he is upset. This can be seen from "No satisfaction, no revenge, nor no ill luck stirring but what lights o' my shoulders, no sighs but o' my breathing, no tears but o' my shedding." Act 3, Scene 1. Yet, Tubal, his `friend', answers with "Yes, other men have ill luck too." Act 3, Scene 1, in a tone that seems almost uncaring. The lack of anybody in the play that seems to care for Shylock is striking, and contrasts with Antonio, as mentioned earlier. The pity felt seems therefore deserving. ...read more.

The other possible explanation would be that Shylock hates Antonio because Antonio is denying Shylock his livelihood. This in itself is also without ground, since Shylock was proven to be rich as can be seen from "Two thousand ducats in that, and other precious, precious jewels." Act 3, Scene 1, and does not actually need the money but only wishes to add to his wealth as he views it as extremely important. Another example to further emphasise Shylock's lack of love and trust for Jessica is "Perhaps I will return immediately. Do as I bid you, shut doors after you." Act 2, Scene 5. Shylock's lack of trust implies that he has spent little time with Jessica and they are not very close. Besides reflecting that Shylock was not a very good father to Jessica, it also seems to imply that Jessica is like a possession that he does not want to lose, much like his diamonds and ducats and worth no more than that. Shylock's view that money is extremely important is also further stressed in "My meaning in saying that he is `a good man' is to have you understand that he is sufficient." Act 1, Scene 3. While Bassanio interprets `a good man', as a person who is kind, generous and follows the Christian faith, Shylock's interpretation is one who has enough money such that if the bond is forfeit, he would earn much in return. This further emphasizes Shylock as a money-loving villain, who views wealth above some of the more important parts of life. Thus, pertaining to the second assumption, while Shylock deserves sympathy as he is a victim of racism and marginalisation, his unfounded and unneeded crimes must also be taken against him, and he does not deserve too much pity. Concluding this essay, we firmly believe that Shylock is a three-dimensional character capable of deep emotions with more than one side to him, and deserves pity as the victim of the marginalisation by the Christians but not too much as he too committed unspoken crimes that the Christians did not commit. ...read more.