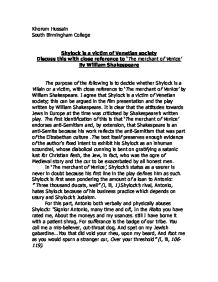 Shylock is a victim of Venetian society - Discuss this with close reference to 'The merchant of Venice'.

Antonio freely owns the abuse he has heaped upon shylock and responds to shylock's complaints with threats of renewed violence. Antonio swears that:" I am also to call thee so again, To spet on thee again, to spurn thee too." Antonio Acknowledges the animosity between him and Shylock, Antonio has saved many of Shylock debtors from defaulting on their loans and thus preventing Shylock from collecting his interest. Throughout the entirety of The Merchant of Venice, Shylock is referred to by name only three times; in the trial scene, the Duke twice identifies Shylock by name, and Portia does so once. In the course of the rest of the play, Shylock is most often referred to simply as "the Jew". That title of "the Jew" is often modified with colorful and disparaging adjectives, such as "Dog Jew" (II, viii, 14) and "currish Jew" (IV, I, 292). In many cases, even the simple title "Jew" is stripped away, and Shylock is no longer a man, but an animal: Gratiano curses Shylock with "O, be thou damned, inexecrable dog!" ...read more.

Shakespeare was, after all, a commercial dramatist and many commercial dramatists make their livings by pandering to, rather than working against, conventional social mores. To make the claim that Shakespeare creates Shylock within an anti-Semitic culture, and therefore invests Shylock with biased anti-Semitic attributes, does not impugn the artistry of the drama. Nor does such a claim implicate Shakespeare himself as a monstrous anti-Semite. All this claim suggests is that Shakespeare, like most of the rest of his society, was hostile toward Jewry for religious and cultural reasons, and that hostility is revealed most clearly in Shylock. What I have tried to trace is the possible, or perhaps the probable, relationship between what was happening in Shakespeare's day and what is happening in Shakespeare's plays. Shylock oversteps the boundaries of his Villainous character. The audience cannot and would not have rooted for Shylock during Shakespeare's lifetime, yet, now we do. Shylock is merely a victim of anti-Semitism. Although victorious in his bond, Shylock was raped of his lands, his faith and his pride. Shylock not necessarily the villain, rather the victim in my point of view. ...read more.