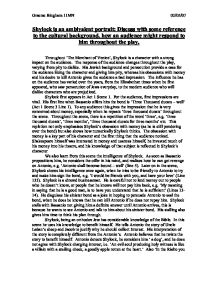 Shylock is an ambivalent portrait: Discuss with some reference to the cultural background, how an audience might respond to him throughout the play.'The Merchant of Venice'.

Shylock is an ambivalent portrait: Discuss with some reference to the cultural background, how an audience might respond to him throughout the play. Throughout 'The Merchant of Venice', Shylock is a character with a strong impact on the audience. The response of the audience changes throughout the play, varying from pity to dislike. His Jewish background and persecution provide a case for the audience liking the character and giving him pity, whereas his obsessions with money and his desire to kill Antonio gives the audience a bad impression. The influence he has on the audience has varied over the years, from the Elizabethan times when he first appeared, who saw persecution of Jews everyday, to the modern audience who will dislike characters who are prejudiced. Shylock first appears in Act 1 Scene 1. For the audience, first impressions are vital. His first line when Bassanio offers him the bond is 'Three Thousand ducats - well' (Act 1 Scene 3 Line 1). To any audience this gives the impression that he is very concerned about money, especially when he repeats 'three thousand ducats' throughout the scene. Throughout the scene, there is a repetition of the word 'three', e.g. 'three thousand ducats', 'three months', 'three thousand ducats for three months' etc. This repletion not only emphasises Shylock's obsession with money (as he is still pondering over the bond) but also shows how numerically Shylock thinks. The obsession with money is a key part of his character and the first thing that the audience noticed. Shakespeare himself was interested in money and usances himself, he invested much of his money into his theatre, and his knowledge of that subject is reflected in Shylock's character We also learn from this scene the intelligence of Shylock. As soon as Bassanio propositions him, he considers the offer in his mind, and realises how he can get revenge on Antonio, e.g. ...read more.

In Act 2 Scene 5, Shylock is on his way to a supper with the Christians. He is only going to annoy them; this shows the audience that he is not considerate. Shylock says 'I did dream of money bags tonight' which shows how much he cares about his money. He also ensures that his house and daughter are safe from those 'Christian Fools', before he leaves e.g. 'Lock up my doors, and when you hear the drum and the vile squealing of the wry-necked fife, clamber not you up to the casements then, not thrust your head into the street to gaze on Christian fools'. He is very concerned about his money, but even more he is worried about his daughter seeing Christians, as he considers the Jews a tribe, and they need to marry within the tribe to keep it going, so he feels that she should marry a Jew, not a Christian. At the end of Act 2 Scene 6, Jessica not only leaves her father, but also takes many of his ducats with her and Lorenzo. Any audience would now give pity to Shylock as he has lost a daughter and a considerable sum of money. Jessica's last line before leaving is 'Farewell, and if my fortune be not crossed, I have a father, you a daughter lost.' The audience would not only give pity, but also perhaps see Shylock as a poor father, more concerned about the welfare of the Jewish culture than the happiness of his daughter. In Scene 8, Salerio and Solanio discuss Shylock. We yet again see the Christian persecution of Shylock, i.e. 'Villain Jew', which would influence the audience. Solanio also overheard Shylock earlier on, after he discovered the desertification of his daughter, e.g. 'My daughter! O my ducats! O my daughter! Fled with a Christian! O my Christian Ducats!' From this it appears that Shylock is just as upset about his daughter's betrayal as he is of the loss of his money, which again emphasises his obsession with money, and makes the audience think that he is not that caring of his daughter. ...read more.

Shylock makes several powerful speeches throughout the play, the only character other than Portia to do so. He wins battles of words against Antonio many times, e.g. 'Signior Antonio, many a time and oft in the Rialto you have rated me about my money and my usances. Still I have borne it with a patient shrug ...' (Act One Scene Three). Also in Act Three Scene 1, 'To bait fish withal. If it will feed nothing else, it will feed my revenge. He hath disgraced me...'. These speeches show that Shylock is quick witted, able to retaliate with words and quite intelligent. The Merchant of Venice could be more described as a romantic comedy than a tragedy. Therefore you would perhaps not expect not to see an evil villain in it. The audience may not be expecting an evil character, so may not consider him a villain, but more of a victim. In many plays, especially ones which have Jews featured, there was an evil character (e.g. The Jew of Malta), so, the audience would be accustomed to this, so may picture Shylock as that evil character. Throughout the play, Shylock is compared to both Antonio and Portia. Whereas Antonio is seen simply as a typical example of mankind (who goes through different stages of emotions), and Portia as Wisdom, Shylock is seen for a lot of the time as the Devil. Throughout the play, there are numerous references to Shylock and the Devil, e.g. 'The devil can cite scripture for his own purposes' (Act One, Scene Three), 'The Jew is the very devil incarnation' (Act Two Scene Two), 'lest the devil cross my prayer, for here he comes in the likeness of a Jew.' (Act Three Scene One) Shylock's response to Portia turning the case against him in Act Four Scene One is 'My deeds upon my head'. This recalls the time when the Jews called for the execution of Christ, so this line again shows that he is a Christian hater. ...read more.