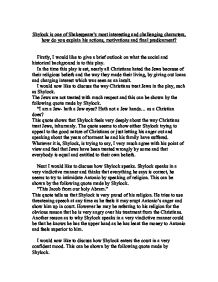 Shylock is one of Shakespeare&amp;#146;s most interesting and challenging characters, how do you explain his actions, motivations and final predicament?

Shylock is one of Shakespeare's most interesting and challenging characters, how do you explain his actions, motivations and final predicament? Firstly, I would like to give a brief outlook on what the social and historical background is to this play. In the time this play is set, nearly all Christians hated the Jews because of their religious beliefs and the way they made their living, by giving out loans and charging interest which was seen as an insult. I would now like to discuss the way Christians treat Jews in the play, such as Shylock. The Jews are not treated with much respect and this can be shown by the following quote made by Shylock. "I am a Jew- hath a Jew eyes? Hath not a Jew hands... as a Christian does? This quote shows that Shylock feels very deeply about the way Christians treat Jews, inhumanly. The quote seems to show either Shylock trying to appeal to the good nature of Christians or just letting his anger out and speaking about the years of torment he and his family have suffered. ...read more.

He was made a mockery of and has lost all he had. He came into the court with the law on his side, however luck prevailed. In conclusion, I believe that we can excuse Shylock for his behaviour as I believe that he tries to protect the honour he has for his religion and this is why he uses such language and actions as he does. However his actions, trying to remove a pound of flesh from another human being are quite unacceptable, he doesn't make any meaningful attempts to show mercy to Antonio and this just backs up my argument that it is personal. Therefore this makes you begin to think whether you can really excuse Shylock. I feel that this is the reason why Shakespeare wrote this play, to make us think twice about what we choose to believe. To show us the contrast between different religions and cultures and how their small differences in beliefs can lead to massive consequences. I feel that Shylocks motivation behind placing Antonio on trial and trying to have him killed is far more personal. His motivation, I think, are Jews. The Jews who have had to put up with intolerable behaviour from Christians and who have been too afraid to speak out for themselves. Sanjay Virdi 10BG ...read more.