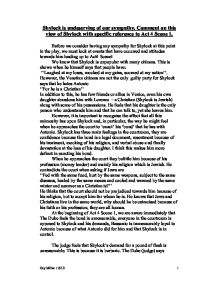 Shylock is undeserving of our sympathy. Comment on this view of Shylock with specific reference to Act 4 Scene 1.

Shylock is undeserving of our sympathy. Comment on this view of Shylock with specific reference to Act 4 Scene 1. Before we consider having any sympathy for Shylock at this point in the play, we must look at events that have occurred and attitudes towards him leading up to Act4 Scene1 We know that Shylock is unpopular with many citizens. This is shown when he himself says that people have: ''Laughed at my loses, mocked at my gains, scorned at my nation''. However, the Venetian citizens are not the only guilty party for Shylock says that he hates Antonio ''For he is a Christian'' In addition to this, he has few friends or allies in Venice, even his own daughter abandons him with Lorenzo - a Christian (Shylock is Jewish) along with some of his possessions. He feels that his daughter is the only person who understands him and that he can talk to, yet she leaves him. However, it is important to recognise the affect that all this animosity has upon Shylock and, in particular, the way he might feel when he approaches the court to 'exact' his 'bond' that he has with Antonio. ...read more.

The judge feels that Shylock's demand for a pound of flesh is unreasonable. This is because it is barbaric. The Duke (judge) says ''That it is thy strange apparent cruelty'' To prove that he dislikes Shylock and his demands. In addition, everyone in the courtroom is against Shylock. This is because of his religion and his demands. In addition, he receives verbal abuse from Gratiano who calls him a ''Damned inexecrable dog''. This quote shows the court is against him. Bassanio is extremely loyal in friendship to Antonio. Bassanio begs Shylock to forget his demands for flesh and offers to pay the money ''Ten times o'er'' To Shylock. Shylock refuses this because he is confident and very defiant. Antonio is honourable because he is prepared for Shylock to take from him a pound of flesh nearest to his heart, which in turn will almost certainly end his life. We know this because Antonio says ''I am armed and well prepared''. The courtroom now knows Antonio is not afraid. We get the feeling Shylock is in control of the courtroom because the whole courtroom is thinking about what to suggest next, because Shylock is so defiant in exacting his bond. ...read more.

''This bond doth give thee here no jot of blood, the words are expressly a pound of flesh''. Shylock has now lost complete control and becomes overpowered by the Duke, Portia and the rest of the courtroom when they mock him. They call him by his religion - Jew, not by his name. For example when Portia says ''Tarry Jew, The law hath yet another hold on you.'' This phrase means wait Jew; the law has more power than you do. In addition, Shylock cannot leave with any dignity because the court has ordered him so that he must give ''One half his goods'' to ''The party 'gainst the which he doth contrive'' and the other half ''comes to the privy coffer of the state''. He is now at his lowest point and is in a state of mind that his predicament is worse than death. Antonio has commanded him to change his religion from Jewish to Christian, which robs him of any distinction. For him this is the worst punishment of all. Shylock is now a totally beaten and resigned man, a far cry from his confident and vengeful image and with his exit from the courtroom. Guy Miller 11SLE 2 ...read more.