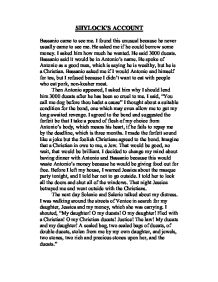 SHYLOCK'S ACCOUNT Bassanio came to see me. I found this unusual because he never usually came to see me. He asked me if he could borrow some money. I asked him how much he wanted. He said 3000 ducats. Bassanio said it would be in Antonio's name. He spoke of Antonio as a good man, which is saying he is wealthy, but he is a Christian. Bassanio asked me if I would Antonio and himself for tea, but I refused because I didn't want to eat with people who eat pork, non-kosher meat. Then Antonio appeared, I asked him why I should lend him 3000 ducats after he has been so cruel to me. I said, "You call me dog before thou hadst a cause" I thought about a suitable condition for the bond, one which may even allow me to get my long awaited revenge. ...read more.

I told her to lock all the doors and shut all of the windows. That night Jessica betrayed me and went outside with the Christians. The next day Solanio and Salerio talked about my distress. I was walking around the streets of Venice in search for my daughter, Jessica and my money, which she was carrying. I shouted, "My daughter! O my ducats! O my daughter! Fled with a Christian! O my Christian ducats! Justice! The law! My ducats and my daughter! A sealed bag, two sealed bags of ducats, of double ducats, stolen from me by my own daughter, and jewels, two stones, two rich and precious stones upon her, and the ducats." They think they are so clever mocking me, but I wasn't joking, I would have my revenge by taking a pound of Antonio's flesh. ...read more.

The duke shall grant me justice. I do wonder, thou naughty gaoler, that thou art so fond to come abroad with him at his request." "I will have my bond." Antonio said that he would not follow me with bootless prayers. He know that I seek his life. Salanio said, "I am sure the Duke will never grant his forfeiture to hold," but Antonio said, "The Duke cannot deny the course of law. For the commodity that strangers have in Venice, if it be denied, will much impeach the justice of the state, since that the trade and profit of the city consistith of all nations. Therefore go, these griefs and losses have so baited me that I shall hardly spare a pound of flesh to-morrow, to my bloody creditor. Well gaoler, on. Pray to God Bassanio comes to see me pay his debt, and then I care not. ...read more.