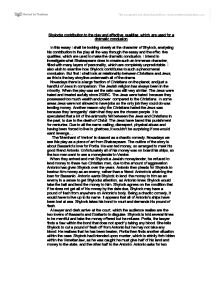 Shylock's contribution to the play and effective qualities, which are used for a dramatic conclusion

Shylocks contribution to the play and effective qualities, which are used for a dramatic conclusion In this essay I shall be looking closely at the character of Shylock, analysing his contribution to the play all the way through the essay and the effective qualities, which are used to make the dramatic conclusion. I intend to investigate what Shakespeare does to create such an immense character, filled with many layers of personality, which are completely unpredictable. I also wish to examine how Shylock contributes to such a phenomenal conclusion. But first I shall look at relationship between Christians and Jews, as this is the key storyline underneath all of the drama. Nowadays there is a large fraction of Christians on the planet, and just a handful of Jews in comparison. The Jewish religion has always been in the minority. When the play was set the ratio was still very similar. The Jews were hated and treated awfully since 250BC. The Jews were hated because they possessed too much wealth and power compared to the Christians. In some areas Jews were not allowed to have jobs so the only job they could do was lending money. Another reason why the Christians hated the Jews was because they 'arrogantly' claim that they are the chosen people. It is speculated that a lot of the animosity felt between the Jews and Christians in the past, is due to the death of Christ. The Jews have bared this punishment for centuries. Due to all the name-calling, disrespect, physical abuse and having been forced to live in ghettoes, it wouldn't be surprising if one would want revenge... The 'Merchant of Venice' is classed as a chaotic comedy. ...read more.

Shylock also feels betrayed by Jessica, as when she leaves, she steals from him 2000 ducats and precious jewels. "I would my daughter were dead at my foot, and the jewels in her ear". Shylock is starting to have to act as if Jessica is dead. Once a Jew marries another Non-Jew or lives a way of life that is not Jewish, their family and friends shut away from them, and are treated as if they no longer exist. This is how Shylock had begun to act towards Jessica. Shylock allows Jessica little freedom, and no social life, it was predictable she would rebel against her father's strict ways. 'Our house is hell'. This shows Jessica's feeling to the constant conflict between her and her father. Jessica is ashamed of her Fathers ways 'Alack, what heinous sin is it in me to be ashamed to be my fathers child!' This is for numerous reasons, Shylock's orthodox religion, controlling his and Jessica's lives. Not allowing Jessica to have a social life meeting people. Nor allowing Jessica to see or hear any Christian festivities. Jessica announces she is Shylock's daughter, but does not have his way of seeing life. 'I am a daughter to his blood, I am not to his manners'. This is because she can see and hear what the public thinks of her father. She also resents his methodology and does not want to be despised like Shylock. The only person that is still alive that he loves is lost to him, it is not surprising that a man with so much sorrow would want to take out his ferocity and pain on his enemy, Antonio. ...read more.

At the end of the scene when Shylock is forced to become a Christian, it is almost made compulsory that he kisses the cross. You can see in his eyes the pain it causes him to do so. You can feel the suspense hooking the audience in at of the end of the scene. Again the audience should be very emotional at this point, as he has psychologically and literality lost everything in his life. He is a beaten man that thought he had a cunning plan that would get revenge on the Christian community, instead everything back fired. In conclusion, Shylock has a minor part in the play compared to characters like Antonio and Portia. However this does not make his role in the play any less. Shylock is the reason for why the play is listed as a chaotic comedy. Shylock is one of the great inventions of the great playwright that was William Shakespeare. His diverse origin and culture creates tension between the character and audience, he is most likely played by a Christian to abuse the role. Taking advantage of stereotypical features. It is Antonio that has the last laugh in the Merchant of Venice. However it is Shylock that is on the minds of all the audience as they leave their seats. This is due to the many effective qualities he has, that are always keeping the audience on their toes. His supposed 'villain' of the play turns out to be the great victor that makes the play the legendary piece of art it is. Shakespeare had written many playwrights but in my opinion 'The Merchant of Venice' is the best due to the sole reason of Shylock's chaotic lifestyle, and the conflict between his Jewish faith and that of a Christian's. ...read more.