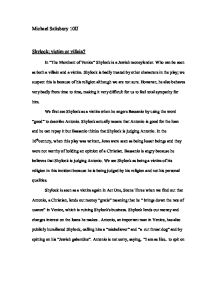 Michael Salisbury 10IJ Shylock: victim or villain? In "The Merchant of Venice" Shylock is a Jewish moneylender. Who can be seen as both a villain and a victim. Shylock is badly treated by other characters in the play; we suspect this is because of his religion although we are not sure. However, he also behaves very badly from time to time, making it very difficult for us to feel total sympathy for him. We first see Shylock as a victim when he angers Bassanio by using the word "good" to describe Antonio. Shylock actually means that Antonio is good for the loan and he can repay it but Bassanio thinks that Shylock is judging Antonio. In the 16thcentury, when this play was written, Jews were seen as being lesser beings and they were not worthy of holding an opinion of a Christian. Bassanio is angry because he believes that Shylock is judging Antonio. We see Shylock as being a victim of his religion in this incident because he is being judged by his religion and not his personal qualities. Shylock is seen as a victim again in Act One, Scene Three when we find out that Antonio, a Christian, lends out money "gratis" meaning that he " brings down the rate of usance" in Venice, which is ruining Shylock's business. Shylock lends out money and charges interest on the loans he makes . Antonio, an important man in Venice, has also publicly humiliated Shylock, calling him a "misbeliever" and "a cut throat dog" and by spitting on his "Jewish gaberdine". ...read more.

Portia behaves like this perhaps to show Shylock's bad side when he gets excited about the fact that he might win the case, or perhaps she likes to see him suffer. Shylock loses the case and according to the Alien law which applies in Venice, must not lose both his life and all his wealth for plotting to harm a citizen of Venice. He is considered to be an Alien simply because he is a Jew. Shylock is due to lose all his wealth. Antonio requests and is granted, partial mercy for Shylock: Shylock can keep his life and half his wealth. Antonio has two conditions. He wants Shylock firstly to "...presently become a Christian; The other, that he do record a gift, Here in court, of all he possessed Unto his son, Lorenzo and his daughter." Shylock is in a humiliating situation. He is being forced to change his religion to be able to keep some of his own money and to save his life. He cannot refuse unless he wants to die. "I am content", he responds when asked how he feels about the ruling. The 16th century audience would probably be extremely happy at this time because of Shylock's misfortune. The audience in the 21st century, will feel more pity for Shylock because our society does not accept the racist ideas expressed in the court of law. The 16th century audiences had not witnessed events such as the Holocaust and the people were jealous of the wealth that Jews seemed to be able to accumulate so they did not feel any pity for the Jews. ...read more.

meaning that if he is denied the right to have his pound of flesh then the laws of Venice are worthless. Shylock is portrayed as a cunning dangerous man in this part of the court case. When Portia reveals to the court that Shylock cannot legally take a pound of Antonio's flesh Shylock expects Antonio to "...pay the bond thrice...' then he will let "...the Christian go." When Shylock realizes that he will not get this he asks Antonio to "give me my principle..." Shylock is portrayed in this scene as a desperate man determined to harm Antonio anyway he can. Shylock seems distraught that his plan has failed and he wants to come away with whatever he can. After writing this essay and studying the play " The Merchant of Venice" I have come to the conclusion that Shylock is a victim of his religion. I believe that he would not have been so sinister if he had been a Christian. However, I think that Shylock is a villain because he creates the reasons for other characters to dislike him; it was not just his religion that provoked the hatred of others, although this is an important factor. The proof of this argument is that there were lots of other Jews at this time; they were also discriminated against because of their religion but not all of them did what Shylock did or anything similar. This means that Shylock's negative attitude and anti-social behaviour were big reasons for Antonio and other characters to dislike him. As a consequence Shylock tried to harm them. I think Shylock is a villain because almost all the reasons for his trying to harm Antonio were due to his personality. 2 ...read more.