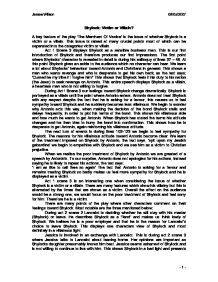 Shylock: Victim or Villain? A key feature of the play 'The Merchant Of Venice' is the issue of whether Shylock is a victim or a villain. This issue is raised at many crucial points most of which can be separated into the categories victim or villain. Act 1 Scene 3 displays Shylock as a sensible business man. This is our first introduction of Shylock and therefore produces our first impressions. The first point where Shylocks' character is revealed in detail is during his soliloquy of lines 37 - 48. At this point Shylock gives an aside to the audience which no character can hear. We learn a lot about Shylocks' behaviour toward Antonio and Christians in general. This shows a man who wants revenge and who is desperate to get his own back, as the text says; 'Cursed be my tribe if I forgive him!' This shows that Shylock feels it his duty to his nation (the Jews) to seek revenge on Antonio. This entire speech displays Shylock as a villain, a heartless man who is not willing to forgive. During Act1 Scene 3 our feelings toward Shylock change dramatically. ...read more.

This shows Shylock in a bad light and presents Shylock, again as a villain. This is the second opinion of Shylock from another character and possible the most profound as Jessica is Shylock daughter. Act 2 Scene 8 displays a third characters picture of Shylock Solanio begins to describe the words that he heard Shylock scream. Shylock shouts out 'Justice' and it is clear he will have no mercy for Antonio. This reinforces Shylock's villainous side and offers us a Christian stand-point. These three acts all consider other characters views of Shylock, all of which, on face value, show him to be a villain. There is one point we must consider before assuming this. All these characters are Christian, except Jessica who is under Christian influence. This is likely to show that feelings toward Shylock are based on Christian prejudice and not well informed opinions. There is no escaping the fact that when encountered by 3rd party opinion, we can only see Shylock as a villain. Does Shylock really act as poorly toward others as most characters believe? There are several scenes which focus on Shylocks attitude toward Jessica and the emotional impact her actions have on him, an alternative view-point. ...read more.

Again we see a villainous side to Shylock which back-fires as a technicality is found in the case, which saves Antonio. The 'tables are turned' and know ironically, Shylock begs for mercy, he is of course shown mercy, 'Christian mercy'. ' When Shylock looses the court case we expect him to walk home, head hung low, but the Christians do not allow this. Shylock is forced to make a will in favour of Lorenzo and become a Christian, which to Shylock means going to hell. If a Jew disgraced his religion (by becoming a Christian) he would be damned to hell. Shylock would rather be dead than be a Christian. This treatment is very cruel and far too extreme. We feel for Shylock and he is seen as a victim. To conclude, it is very easy to see Shylock as a victim or a villain. It does seem though that anytime he acts in a villainous way it is caused by extreme pressure and prejudice from the Christians. This villainous side is not the true Shylock. Shylock is a kind decent man, a good father. He is merely cursed by a Jewish background, struggling to survive in a Christian world. James Wilson 08/05/2007 - 1 - ...read more.