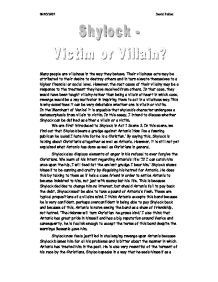 Many people are villainous in the way they behave. Their villainous acts may be attributed to their desire to destroy others and in turn elevate themselves to a higher financial or social level. However, the root cause of their villainy may be a response to the treatment they have received from others. In that case, they would have been taught villainy rather than being a villain at heart in which case, revenge would be a key motivator in inspiring them to act in a villainous way. This is why sometimes it can be very debatable whether one is villain or victim. In the 'Merchant of Venice' it is arguable that shylock's character undergoes a metamorphosis from villain to victim. In this essay, I intend to discuss whether Shylock can be defined as either a villain or a victim. We are first introduced to Shylock in Act 1 Scene 3. In this scene, we find out that Shylock bears a grudge against Antonio 'How like a fawning publican he looks! I hate him for he is a Christian.' By saying this, Shylock is talking about Christian's altogether as well as Antonio. However, it is still not yet explained what Antonio has done as well as Christians in general. Shylock also displays elements of anger in his refusal to ever forgive the Christians. We learn of his intent regarding Antonio's life: 'If I can catch him once upon the hip, I will feed fat the ancient grudge I bear him.' ...read more.

It is still debatable whether Shylock is victim or villain. So far, nothing has proved he is a victim apart from what Shylock claims. But it is possible that all this hatred and villainy could just be retaliation for all the villainy of Antonio and the Christian's towards Shylock. Next I will discuss the scene where Shylock's hatred towards Antonio now becomes apparent. In Act III Scene iii his repetition of 'I'll have my bond' shows him to be openly aggressive. He warns those who have treated him as 'a dog' to 'beware my fangs'. Shylock's determination to destroy Antonio continues during Act IV in the trial scene. He refuses to show mercy when asked by Portia and the Duke. 'On what compulsion must I? Tell me that.' Another way in which Shylock is established as a villain is through his treatment of Jessica. It is in Act 2 Scene 5 that we first witness an interaction between Shylock and Jessica. During this he orders her about as if she was a servant and mentions nothing about her well being. He only instructs her to look after the well being of his house. 'Hear you me, Jessica: Lock up my doors: and when you hear the drum... Nor thrust your head into the public street... But stop my house's ears...Let not the sound of shallow foppery enter.' ...read more.

After he loses the trial, Shylock's life was in the hands of the Duke. Shylock is na�ve in the way that he believes that he can take on the Christians and win when the foundation of Venation law is designed to serve the best interests of the Christians. Shylock's punishment is overly harsh with Antonio forcing him to convert to Christianity. Shylock's life is spared but he might as well be dead because he has nothing to live for. All his wealth has been distributed among his sworn enemies. Overall, I feel that ultimately Shylock is a victim. This is inevitable due to the time period he is living in as well as the area where the laws are made to favor Christian's. An example of this is when Shylock lost the case and received an overly harsh punishment from Antonio which was a religious conversion. This is harsh because not only has Shylock previously lost his wife, he has now lost his dead wife's ring which was of great sentimental value to him, he lost his daughter and his wealth was distributed amongst his enemies. He now has no possessions due to the fact he has been victimized by the laws and the people around him. Having said all this, I'd say Shylock is a victim more than he is a villain despite the thin borderline although I think this was what Shakespeare intended, for the distinction between villain and victim to become blurred which is what he does well in act 4, the trial. 08/05/2007 David Pollon ...read more.