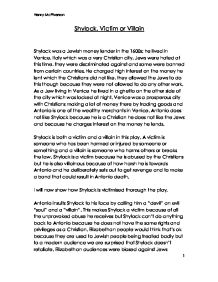 Shylock, Victim or Villain Shylock was a Jewish money lender in the 1600s; he lived in Venice, Italy which was a very Christian city. Jews were hated at this time, they were discriminated against and some were banned from certain countries. He charged high interest on the money he lent which the Christians did not like, they allowed the Jews to do this though because they were not allowed to do any other work. As a Jew living in Venice he lived in a ghetto on the other side of the city which was locked at night. Venice was a prosperous city with Christians making a lot of money there by trading goods and Antonio is one of the wealthy merchants in Venice. Antonio does not like Shylock because he is a Christian he does not like the Jews and because he charges interest on the money he lends. Shylock is both a victim and a villain in this play. A victim is someone who has been harmed or injured by someone or something and a villain is someone who harms others or breaks the law. Shylock is a victim because he is abused by the Christians but he is also villainous because of how harsh he is towards Antonio and he deliberately sets out to get revenge and to make a bond that could result in Antonio death. I will now show how Shylock is victimised thorough the play. Antonio insults Shylock to his face by calling him a "devil" an evil "soul" and a "villain". This makes Shylock a victim because of all the unprovoked abuse he receives but Shylock can't do anything back to Antonio because he does not have the same rights and privileges as a Christian. Elizabethan people would think that's ok because they are used to Jewish people being treated badly but to a modern audience we are surprised that Shylock doesn't retaliate. ...read more.

But Shylock shows that he is a harsh man and that Jessica could not just be exaggerating when he does not even let Jessica look out the window because he is a miserable man and is strict father. "Lock up my doors... Clamber you not up to the casements" I think Shylock is portrayed as a villain in this scene because he is treating his daughter badly and basically locking her in the house, she is not even allowed to see the masques. This shows that Shylock is a very mean father and does not want her to have any fun he would be portrayed as very protective as he has no one left. Shylock is happy with the news that Antonio's ships have crashed and he now wants to carry out his revenge 'Let him look to hid bond.' Shylock is shown as a villain in the scene because he has no sympathy for Antonio even thought he has lost all his ships. All Shylock is thinking about is his bond and what he can take. Antonio's friends have come to like Jessica and feel sorry for her because she had to be a Jew for so long but they still have a very low opinion of her father "there is more difference between thy flesh and hers than between jet and ivory." Jet is black which is a colour always associated with evil which is a reference to Shylock and ivory is white like purity which is a reference to Jessica. Through all his loss Shylock's hate for Christianity and Antonio have grown. "let him look to his bond." This is Shylock showing that if Antonio fails to pay his bond then he will exact his revenge no matter what they say. When asked what use a pound of flesh would be he replies that he doesn't care about what he will do with the flesh. ...read more.

Certain characters are pleased about his misfortune whereas a modern day audience would have mixed feelings. In my opinion I think that Shylock got what he deserved but it was a shame that he deserved something so bad. The Duke gives his verdict. "I pardon thee thy life before thou ask it. For half thy wealth, it is Antonio's; the other half comes to the general state." The duke, a Christian is being very merciful with Shylock even when he was cold hearted. Shylock loses all his money and half of it goes to Antonio whom he already loathed so he will become unemployed and the fact the he has lost what he loves will destroy him. It is ironic how the loan of the money started the bond and the bond caused him to lose all his money. An Elizabethan audience would be satisfied at this but a modern audience may take pity on him. Antonio gets his revenge in a cunning way "For this favour he presently becomes a Christian; the other that he so records a gift,... of all he posses unto his son Lorenzo and his daughter." Now that he also has to give up his religion which is basically all he cares about other than money would leave him distraught, An Elizabethan audience would think Antonio is magnanimous. Shylock now has no choice but to lose religion and his money which would ruin him. In conclusion I have mixed views about whether Shylock is a villain or a victim because of how he was treated throughout the play. He also seemed to get more and more villainous after all the anti-Semitism and when his daughter leaves with all his money. There is evidence of him being a villain, for example the bond which was truly terrible but never the less his refusal to show mercy in the trial scene could have been because of how the Christians treated him. In my opinion Shylock was hoist by his own petard but he is a victim of a racist society. ?? ?? ?? ?? Henry McPherson 1 ...read more.