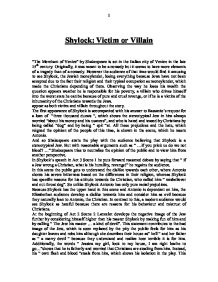 Shylock: Victim or Villain "The Merchant of Venice" by Shakespeare is set in the Italian city of Venice in the late 15th century. Originally, it was meant to be a comedy but it seems to have more elements of a tragedy than of a comedy. However the audience of that time would find it amusing to see Shylock, the Jewish moneylender, losing everything because Jews have not been accepted due to the fact their religion and their typical occupation as moneylender, which made the Christians depending of them. Observing the way he loses his wealth the question appears weather he is responsible for his poverty, a villain who drives himself into the worst state he can be because of pure and cruel revenge, or if he is a victim of the inhumanity of the Christians towards the Jews. appear as both victim and villain throughout the story. The first appearance of Shylock is accompanied with his answer to Bassanio's request for a loan of "three thousand ducats ", which shows ...read more.

At the beginning of Act 2 Scene 2 Lancelot develops the negative image of the Jew further by considering himself higher than his master Shylock by making fun of him and by calling " The Jew his master ... a kind of devil". This statement contributes to the bad image of the Jew, which is soon replaced by the pity the public feels for him as his daughter leaves and robs him although she describes their house as" hell " and her father as " a merry devil " because they understand and realize how terrible it is for him. Additionally, the words " Jessica my girl, look to my house, I am right loathe to go..."shows that he is fatherly and worried that Christians are stealing from him. Instead, his " own flesh and blood "steals from him, which shows his isolation in the play. This part allows the audience to empathise with the Jew and he appears as a victim of the society. ...read more.

shows him appear as a villain. In act 4 scene 1 where he should show mercy he insists on his bond, " And by our holy Sabbath have I sworn to have the due and forfeit of my bond", and his sarcasm in the court, would make him lose all remaining sympathy the Elizabethan may have had and changed it into hate. The similar reaction would be showing the audience of today because cutting a pound of flesh is more evil than any prejudice. As the scene continues Shylock proceeds with his arguments and speaks as he doing the right thing. The audience no longer has any compassion towards Shylock but it regains sympathy after Christianity wins the battle. As a conclusion, Shylock is neither a villain nor a victim. It changes throughout the play and Shakespeare manipulates the audience so that it always feels the extreme. Additionally, the way the characters are represented either really noble and in the play plays a big role in the development of the opinion about Shylock. 1 ...read more.