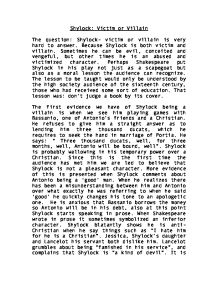 Shylock: Victim or Villain The question: Shylock- victim or villain is very hard to answer. Because Shylock is both victim and villain. Sometimes he can be evil, conceited and vengeful, but other times he is an abused and victimized character. Perhaps Shakespeare put Shylock in his play not just as a scapegoat but also as a moral lesson the audience can recognize. The lesson to be taught would only be understood by the high society audience of the sixteenth century, those who had received some sort of education. That lesson was: don't judge a book by its cover. The first evidence we have of Shylock being a villain is when we see him playing games with Bassanio, one of Antonio's friends and a Christian. He refuses to give him a straight answer as to lending him three thousand ducats, which he requires to seek the hand in marriage of Portia. He says: " Three thousand ducats, well, for three months, well, Antonio will be bound, well". Shylock is probably wallowing in his temporary power over a Christian. Since this is the first time the audience has met him we are led to believe that Shylock is not a pleasant character. More evidence of this is presented when Shylock comments about Antonio being a 'good' man. ...read more.

upon my Jewish gabardine "and calling shylock " misbeliever, cutthroat dog... etc". Even worse, Antonio is not sorry and is " like to spit on thee again". The audience sees Antonio has no need to insult and humiliate Shylock in public, the only reason he does this is because he is higher ranking in society than Shylock. The 20th century audience sees that Antonio has no need to insult and humiliate shylock in public, and feels some sympathy at this point for him. The situation is made worse by the fact that Antonio is a well-respected man in Venice, so others take their lead from him and also treat shylock badly. An excellent example of this is Salario and Solorino, Antonio's friends. They insult him just because Antonio has insulted him. For instance, they mock him when he is distressed about Jessica's elopement, cruelly jeering him saying "why, all the boys in Venice crying his stones, his daughter and his ducats". This attitude towards shylock is Probably shared by the 16th century audience but the 20th century audience can see that Antonio's attitude to shylock and that of his followers is suspiciously alike. Perhaps they mock shylock following Antonio's lead? The young boys in the street who tease shylock are far too young to formulate their own ideas about him to justify their hate. ...read more.

Even the laws of Venice are loaded against shylock, he is considered an alien in Venice, and if an alien conspires to kill a Venetian he stands to loose all his goods and his life as the judge says " the other half (of shylocks goods) comes to the privy coffer of the state". Poor shylock is now a broken man and to add to his humiliation and sadness Antonio smugly gives his half of Shylocks goods back to him. Sadly he asks "leave from here". In conclusion, I believe that shylock is both victim and villain. He is living in a society that is strongly opposed to him just because he is a Jew. However he can be mean and nice, villainous as we see from his behavior in court. If shylock truly was a villain, and to tell the truth he can be quite evil, it would be solely because he has been so abused it has made him bitter. I believe that Shakespeare persecuted shylock so much to show a sort of satire of society in the 16th century, perhaps he was trying to influence public opinions or perhaps shylock is just what he seems, whatever the case I think shylock is one of the most controversial characters Shakespeare has ever portrayed. ...read more.