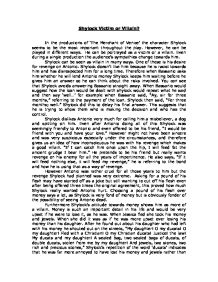 Shylock Victim or Villain? In the productions of 'The Merchant of Venice' the character Shylock seems to be the most important throughout the play. However, he can be played in different ways. He can be portrayed as a victim or a villain. Even during a single production the audience's sympathies change towards him. Shylock can be seen as villain in many ways. One of these is his desire for revenge on Antonio. Shylock doesn't like him because he is racist towards him and has disrespected him for a long time. Therefore when Bassanio asks him whether he will lend Antonio money Shylock keeps him waiting before he gives him an answer so he can think about the risks involved. You can see that Shylock avoids answering Bassanio straight away. When Bassanio would suggest how the loan would be dealt with shylock would repeat what he said and then say 'well...' for example when Bassanio said, "Ay, sir for three months," referring to the payment of the loan. Shylock then said, "For three months; well." Shylock did this to delay his final answer. This suggests that he is trying to show them who is making the decision and who has the control. ...read more.

He didn't even trust her, his own daughter. Another way of portraying Shylock is through his cruelty and insistence on his supposed justice. When he insisted on sticking to sticking to the bond to get his 'justice' that was quite spiteful and unnecessary especially after he was offered more money instead. In the trial the Duke asks how he should hope for mercy rendering. He then responded with, "What judgment shall I dread, doing no wrong?" He feels as though he is doing nothing wrong and that he is being completely fair on asking what was agreed upon if Antonio should not pay on time. He also says, "The pound of flesh, which I demand of him, is dearly bought; 'tis mine and I will have it. If you deny me, fie upon your law!" he acts as if he the rightful owner to the flesh and that he is entitled to the flesh and if he refused it than the law is immoral and right by not giving him justice. Even Jessica commented on how shylock wanted 'justice'. She said, "He would rather have Antonio's flesh then twenty times the value of the sum that he did owe him." ...read more.

He was also embarrassed in front of the courtroom as Portia, who at the time was dressed as a man to defend Antonio, had found a loophole to the agreement and Shylock was left looking like a fool. She said, "Prepare thee to cut off a pound of flesh. Shed thou no blood, nor cut thou less nor more but just a pound of flesh." To cut off an exact pound of flesh and have it shed no blood is impossible to do. Therefore Shylock lost the trial and not only left with no pound of flesh he wasn't allowed the money to replace it, instead he had to pay penalties for attempted murder and he also had to give up his faith, which at that point was all that he had left. In conclusion, I think that Shylock was mistreated by Antonio in the past and he had a right to want revenge but it shouldn't have been so harsh. No one deserves to have a pound of flesh to be cut off. I thought that Shylock should have paid the penalty at the end but it was unfair to make him become a Christian. By Elizabeth Sima Toorani (10F) ...read more.