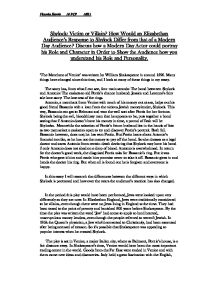 Shylock: Victim or Villain? How Would an Elizabethan Audience's Response to Shylock Differ from that of a Modern Day Audience? Discuss how a Modern Day Actor could portray his Role and Character in Order to Show the Audience how you understand his Role and Personality. `The Merchant of Venice' was written by William Shakespeare in around 1596. Many things have changed since this time, and I look at many of these things in my essay. The story has, from what I can see, four main strands: The bond between Shylock and Antonio: The caskets to aid Portia's chance husband: Jessica and Lorenzo's fairy tale love story: The love test of the rings. Antonio, a merchant from Venice with much of his money out at sea, helps out his good friend Bassanio with a loan from the vicious Jewish moneylender, Shylock. This way, Bassanio can get to Belmont and woo the well sort after Portia for her fortune. Shylock being the evil, bloodthirsty man that he appears to be, puts together a bond stating that if Antonio doesn't have his money in time, a pound of flesh will be Shylocks. Meanwhile the selection of Portia's future husband lies in the hands of fate as two men select a casket to open to try and discover Portia's portrait. Both fail. Bassanio however, does not; he has won Portia. But Portia hears about Antonio's financial trouble, as he has not the money to pay off the bond. So she dresses as a legal doctor and saves Antonio from certain death declaring that Shylock may have his bond if only Antonio does not shed one drop of blood. Antonio is overwhelmed. In return for the doctor's good work, the disguised Portia asks for Bassanio's ring. But it was Portia who gave it him and made him promise never to take it off. Bassanio gives in and hands the doctor his ring. ...read more.

Perhaps he doesn't know himself. He goes on to say that basically, he is whom he is. He cannot change himself and whatever he wants or feels cannot be explained. He gives a few examples, i.e. not liking dogs. Also he talks about not needing to explain his contract, as it is his contract. In this scene, Shylock behaves quite strangely, and almost fake. In Act1 Scene3 Shylock is totally open about his grievances against Antonio. "You called me a dog: and for these courtesies, I'll lend you thus such monies?" Act1 Scene3 L120 But in Act4 Scene1, he gives quite a big long speech explaining why he is not going to explain himself. He totally refuses to discuss his feelings, except to confirm his hatred for Antonio. This seems almost like a front that he puts on. Maybe he cannot think of a reason. Perhaps he is using word games to impress the Duke without making any sense. I think that the villain side of him is coming through, but he is trying to cover it up and appear a victim. Shylock next, seems as if he is trying to put off the trial; as he pointlessly questions many of Bassanio's comments. When Bassanio insists that every offence is not hate at first, Shylock become cocky. "What, wouldst thou have a serpent sting thee twice?" Ac4Ac1 L69 Nor Antonio or Bassanio can give a straight answer to this. When the Duke asks Shylock to show mercy, Shylock comes across as very rude as he implies that "he" hasn't done anything wrong. Another angle Shylock takes to weaken the Duke is to uses patriotism. He basically says "Aren't you proud of your country? If you do not enforce the law in this case, people will see the Venetian law to be worthless. "If you deny me, fie upon your law: there is no force in the decrees of Venice," Ac4Sc1 L101 I think that this was quite a persuasive way for Shylock to take. ...read more.

After studying the `Merchant of Venice' play, and watching the three versions of videos, it has become clear that Shylock's moods are uncontrollable and uncertain. He can switch from a villain to a victim in a matter of paragraphs. Throughout the play he has had his fair share of being both. Overall, no one can solemnly say that he is either a victim or a villain, also no one knows which Shakespeare intended him to be. In many of the scenes he comes across as being both. Even after studying the play I cannot decipher between the two. It appears to me that he has a split personality, somewhat of a short temper maybe. Because he goes from one extreme of being a venomous villain to being a sorry victim, he must have two sides that keep on coming to the surface at different times. To me, it appears that Shylock is no more than a normal man, only with somewhat of a mean streak and a sorry streak. His whole life Shylock has been victimised for being Jewish and it is when he tries to revenge that his evil streak rises to the surface. Maybe his mean streak comes out when he remembers how badly he has been treated in the past. It could be that there is this constant bad mood brewing inside him, waiting for an opportunity to arise for him to get it out and blame his troubles on everyone. I think that Shylock is a normal man, only exaggerated, as he can go from being villainous, but much more so than a normal man (enough to kill someone), to being a complete victim, but again, more so than a normal man. Not many other men have had to put up with the sufferings Shylock has. Therefore Shylock can be both a victim and a villain, as can anyone. It is Shylock's surroundings that make him what he is. The place he lives and the denial he gets from the public are the causes of his exaggerated and unpredictable moods and personality. ...read more.