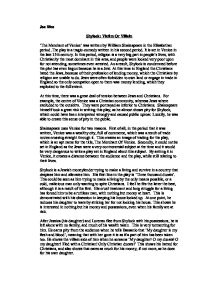 Shylock: Victim Or Villain - The Merchant of Venice written by William Shakespeare

Joe Rice Shylock: Victim Or Villain 'The Merchant of Venice' was written by William Shakespeare in the Elizabethan period .The play is a tragic-comedy written in his second period. It is set in Venice in the late 15th century. In this period, religion is a very big part in people's lives, with Christianity the most dominant in this area, and people were looked very poor upon for not attending, sometimes even arrested. As a result, Shylock is condemned before the plot has even begun because he is a Jew. At this time in England the Christians hated the Jews, because of their profession of lending money, which the Christians by religion are unable to do. Jews were often forbidden to own land or engage in trade in England so the only occupation open to them was money lending, which they exploited to the full extent. At this time, there was a great deal of tension between Jews and Christians. For example, the centre of Venice was a Christian community, whereas Jews where excluded to the outskirts. They were portrayed as inferior to Christians. Shakespeare himself took a great risk in writing this play, as he almost shows pity for Shylock, which could have been interpreted wrongly and caused public uproar. ...read more.

He shows the villain side of him when he screams 'My daughter! O my ducats! O my daughter! Fled with a Christian! Only Christian ducats!' This shows his hatred for Christians, and also shows that cares as much for his money, if not more, as he does for his own daughter. Shylock's pleas in Act three, Scene Five, shows him as a victim or constant abuse from Christian's. 'What's his reason? I am a Jew. Hath not a Jew eyes? Hath not a Jew hands, organs, dimensions, senses, affections, passions, fed with the same food, hurt with the same weapons'. He is saying that we are all the same, just follow different religions. Told that his ships have sunk, Antonio is now bankrupt, and by Venetian law must grant Shylock a pound of flesh. In this, the courtroom scene, in Act Four, Scene One, shylock is shown as a villain. As he walks in and places the 'Scales of Justice' on the table, a tarnished image of him is created as he begins preparing his knife on his boot. This scene is the last chance he gets in the play to exact his revenge on Antonio, but more specifically, Christians. ...read more.

Not only does he feel humiliated at being made a Christian by the court, but he also has lost his only friend, Tubal, who walked out as Shylock was about to cut the pound of flesh. His cruel intentions have backfired and he is now left with nothing. Shylock can be described in this play as both a comic and a tragic. A comic because of his quick-witted responses to the insults thrown at him every day, and a tragic because of the loss of his friend, his daughter and his belongings. I personally feel Shylock is a victim in this story. A victim of constant abuse and torment that have pushed him to the edge of insanity and have led him to hate the Christians. This hatred for those who are responsible for his misery is, in my mind, often miss-interpreted as part of a cold personality, although quite the opposite is true. He is in fact a quit businessman that only wishes to make a living, but due to his constant torture, has been made into a cold-blooded villain. The end of the story shows Jessica singing a Jewish song, happy that she has been accepted into the Christian community. This also makes about Shylock; that he has been an out cast all his life, due to his evil ways, not the fact he is Jewish, as Jessica, also a Jew, has been accepted. ...read more.