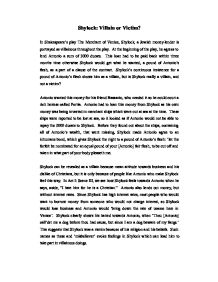 Shylock: Villain or Victim? In Shakespeare's play The Merchant of Venice, Shylock, a Jewish money-lender is portrayed as villainous throughout the play. At the beginning of the play, he agrees to lend Antonio a sum of 3000 ducats. This loan had to be paid back within three months time otherwise Shylock would get what he wanted, a pound of Antonio's flesh, as a part of a clause of the contract. Shylock's continuous insistence for a pound of Antonio's flesh shows him as a villain, but is Shylock really a villain, and not a victim? Antonio wanted this money for his friend Bassanio, who needed it so he could court a rich heiress called Portia. Antonio had to loan this money from Shylock as his own money was being invested in merchant ships which were out at sea at the time. These ships were reported to be lost at sea, so it looked as if Antonio would not be able to repay the 3000 ducats to Shylock. Before they found out about the ships, containing all of Antonio's wealth, that went missing, Shylock made Antonio agree to an inhumane bond, which gives ...read more.

Such names as these and 'misbeliever' evoke feelings in Shylock which can lead him to take part in villainous doings. Shylock wanted revenge on Antonio who because of the way he was treated. A sense of victimisation is conveyed when Antonio admits 'I am as like to call thee [dog] again, to spit on thee again.' Shylock tells the audience how he intends to get revenge on Antonio, 'I'll plague him, I'll torture him.' The audience also learns a little about Shylock's villainous side when his daughter Jessica tells of what she had heard: 'I have heard him swear... that he would rather have Antonio's flesh than twenty times the value of the sum.' Shylock however only feels this way because the way he, and his race, had been treated for years by Christians like Antonio. This loan is giving Shylock a chance to take revenge on him, so these reactions by Shylock convey him as a villain because of his victimisation. Shylock had a lot of money; he can be shown as a victim as his daughter Jessica, who disliked the way she was treated by him, had run off with ...read more.

Hath not a Jew hands, organs, dimensions, senses, affections, passions? Fed with the same food, hurt with the same weapons, subject to the same diseases, healed by the same means, warmed and cooled by the same winter and summer, as a Christian is? If you prick us, do we not bleed? If you tickle us, do we not laugh? If you poison us, do we not die? And if you wrong us, shall we not take revenge?' From this small speech, we see how he has had to put up with cruel treatment because of his race and also Shylock's point of view on this whole issue in a clearer way. We see him as a villain only because of his victimisations. Shylock however is immediately forgotten to be more of a victim than a villain when he admits: 'I would my daughter were dead at my foot, and the jewels in her. Would she were hearsed at my foot, and the ducats in her coffin.' This conveys him as a cruel, pitiless villain since he would rather have his money than his own daughter. He has always treated his daughter unequally, so he becomes a victim of her stealing his money because of his villainous behaviour. ...read more.