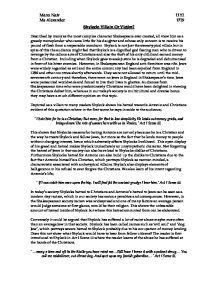 Shylock: Villain Or Victim? Described by many as the most complex character Shakespeare ever created, all view him as a greedy moneylender who cares little for his daughter and whose only concern is to receive his pound of flesh from a respectable merchant. Shylock is not just the stereotypical villain but in spite of this the audience might feel that Shylock is a dignified god fearing man who is driven to revenge by the callous acts of Christians and also the theft of his only child and earned money from a Christian. Including when Shylock goes to seek justice he is degraded and dehumanised in front of his bitter enemies. However, in Shakespearean England anti-Semitism was rife. Jews were widely regarded as evil and the entire community had been expelled from England in 1290 and other countries shortly afterwards. They were not allowed to return until the mid-seventeenth century and therefore, there were no Jews in England in Shakespeare's time. Jews were persecuted worldwide and forced to live their lives in ghettos. Audiences from Shakespearean time who were predominately Christians would have been delighted in viewing the Christians defeat him, where as in our today's society is multicultural and diverse hence they may have a much different opinion on this topic. Depicted as a villain to many readers Shylock shows his hatred towards Antonio and Christians evident of this quotation where in the first scene he says in aside to ...read more.

night she is due to elope with Lorenzo and Jessica appears to be rather nervous - showing that Shylock is not a very attentive father and family orientated as well as intelligent among family members. This states again how weak and broken their relationship really is. Shylock could be considered to be very cold and brutal towards to his only daughter. Perhaps even Shylock is too preoccupied with generating yet more wealth to concern himself with his only daughter. This view of him as self-serving and avaricious is compounded by his reaction to his daughter eloping with a Christian. He is outraged that she has left and has stolen his money. He says; 'I would my daughter were dead at my foot.' Act II Scene v. Again Shylock portrays himself in an unsympathetic way, as vindictive and villainous. He wishes for the death of his own daughter as the price for her treachery and even goes so far as to wish that the ducats were in the coffin with her dead body as evidence of what she has done. This shows Shylock to be a cold, heartless man, utterly devoid of parental feeling, who is focused purely on revenge and money. Antonio had accepted the offer with a lawyer present and a witness present therefore understanding the consequences in place after accepting such an offer. ...read more.

Furthermore, his only daughter elopes with a Christian which is also one of his persecutors. She steals his money and the ring his wife gave him. It seems justified that he should feel betrayed and hurt. Shylock only demanded a bond that Antonio had accepted to and it could be argued that if Antonio was not willing to die, then why did he consent to Shylocks contract or bond in the first place. We can only guess at the way in which Shakespeare intended Shylock to be portrayed. He becomes throughout the play, an increasingly lone figure and is portrayed by Shakespeare to be in some ways very 'human'. This essay feels that Shakespeare intended Shylock to be a victim, however it can also be argued that Shakespeare himself decided to show Shylock completely defeated at the end of the play, and to not even have his religion to hold on to, that indicates Shylock to be to an extent a villain; moreso this essy believes he was created to challenge the pre-conceptions and ideologies of the Elizabethan era. In addition this essay believes that he is not a villain because he inspires too much emapthy in an audience to ever be that. Having said this, This essay feels that it is not productive for us to simply categorise Shylock as either victim or villain. Through Shylock, Shakespeare explores the way in which the line between the oppressed and the oppressor can become vague. Manu Nair 11Y2 Ms Alexander 1729 ...read more.