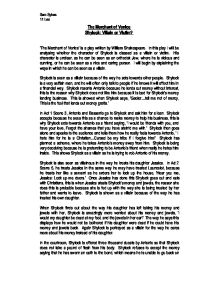 The Merchant of Venice Shylock: Villain or Victim? 'The Merchant of Venice' is a play written by William Shakespeare. In this play I will be analysing whether the character of Shylock is classed as a villain or victim. His character is unclear, as he can be seen as an orthodox Jew, where he is vicious and cunning, or he can be seen as a nice and caring person. I will begin by explaining the ways in which he can be seen as a villain. Shylock is seen as a villain because of the way he acts towards other people. Shylock is a very selfish man, and he will often only talk to people if he knows it will affect him in a financial way. Shylock resents Antonio because he lends out money without interest, this is the reason why Shylock does not like him because it is bad for Shylock's money lending business. This is showed when Shylock says, 'Gaoler...tell me not of mercy, This is the fool that lends out money gratis.' In Act 1 Scene 3, Antonio and Bassanio go to Shylock and ask him for a loan. Shylock accepts because he sees this as a chance to make money to help his business, this is why Shylock acts ...read more.

This shows that Shylock is selfish and because of the way he still tried to get money out of Antonio puts him across as a villain. I will now outline the ways in which Shylock is shown as a victim. As the play begins, we can see that Shylock has suffered a lot of abuse especially at the hands of Christians, in particular Antonio. Antonio humiliates Shylock publicly and criticises him about the way he lends money, in this way Shylock can be seen as a victim. In Act 1 Scene 3, Shylock says to Antonio, 'In the Rialto you have rated me about my moneys and my usances, for sufferance is the badge of all our tribe.' This draws sympathy to Shylock because of the way he has been treated and humiliated, but he does nothing about it. He does not stand up for himself, and because of this it shows him as a victim. Anti- Semitism and racism is often thrown at Shylock throughout the play from the Christians. An example of this is shown in Act 1 Scene 3, as it says that Antonio has spat at Shylocks gabardine, which is a traditional coat worn by Jews, and that he also spat on his beard. ...read more.

This is because they felt that as he is a Jew, which they hate, he is like the devil, who is seen as a person who is evil and a person that everyone hates, which is the exact way Christians felt towards Shylock. 'If you prick us do we not bleed...If you poison us do we not die? And if you wrong us, shall we not revenge?' this is said by Shylock as he tries to take sympathy from the audience and readers. He is trying to get the point across that Christians are just the same as Jews as they are both human beings, they just follow a different religion. This displays Shylock as a victim as he is being racially abused once again. Shylock's role in the play changes a great deal, because one moment he is being discriminated because he is a Jew and the next moment he tries to trick Antonio into giving him money that he knows Antonio cannot not pay back. Overall, I do not think that Shylock can be described as a villain or victim because he shows parts in the play where he is both. Sam Sykes 11 Leo ...read more.