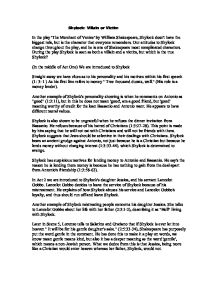 Shylock: Villain or Victim In the play 'The Merchant of Venice' by William Shakespeare, Shylock dosn't have the biggest role, but is the character that everyone remembers. Our attitudes to Shylock change throughout the play, and he is one of Shakespeare most complicated characters. During the play Shylock is seen as both a villain and a victim, but which is the true Shylock? (In the middle of Act One) We are introduced to Shylock Straight away we have clues as to his personality and his motives within his first speech (1: 3: 1 ) As his first line refers to money " Tree thousand ducats, well." (His role is a money lender). Another example of Shylock's personality showing is when he comments on Antonio as "good" (1:3:11), but in this he does not mean 'good', am a good friend, but 'good' meaning worthy of credit for the loan Bassanio and Antonio want. He appears to have different moral values. Shylock is also shown to be ungrateful when he refuses the dinner invitation from Bassanio. He refuses because of his hatred of Christians (1:3:27-28). This point is made by him saying that he will not eat with Christians and will not be friends with them. ...read more.

Hatred towards Antonio is shown again, Antonio himself knows why Shylock hates him so much (3:3:21-24). That reason is that Antonio does not charge interest, but Shylock does. Antonio is helping people pay back Shylock so they can avoid paying interest. Without interest Shylock's business is in jeopardy. Later on in Act 4, Shylock admits that he hates Antonio so much that he would rather have Antonio's flesh then his money when he doesn't answer Antonio's question about it (4:1:40-42). Lastly Gratanio calls Shylock "bloody, starved and ravenous." This comment is one example of how other people view him. As we can see, Shylock is seen as a villain by many people, but on the other hand Shylock is a victim as well. We can see this by examining and understanding the following evidence. In Act One Shylock extends his friendship to Antonio, but Antonio rejects Shylocks offer (1:3:161), Christian people do not want to be friends with Shylock 'The Jew', and Shylock, as a Jew living in Venice is a victim of racist isolation. Another point is that when Shylock tries to explain a point further by referring to the Bible to help Antonio understand, Antonio replies by saying "The devil can cite scriptures for his purpose. ...read more.

Gratanio viciously insults Shylock even more, by as well as calling him a dog he is now took it further and called him a wolf. Also in this section of the speech Gratanio also mentions that Shylock should be hanged on the gallows (4:1;134-135) Lastly the Duke regards all non-Jewish people as the same, and requires a non-Jewish answer to a question he asks or a gentile answer (4:1:31-34). As we can see there is not a convincing amount of evidence on one side to say that Shylock is either a villain or a victim. He remains a very compelling and complex character throughout the play and one suggestion is that Shakespeare used him to underline the hatred surounding the Jewish people at that time. Since 'The Merchant of Venice' was written there has always been a great deal of controversy surrounding Shylock. He's portrayed to many as a villain who enjoys making misery for Christians who have abused and corrupted him in the past. I same stage versions he comes across in the play as a comical and harmful character who receives the downfall he is due. However he is a family man who is godly and law abiding but who is driven to revenge by constant racial abuse and jealousy. In my opinion, Shylock is partly victim and partly villain. ...read more.