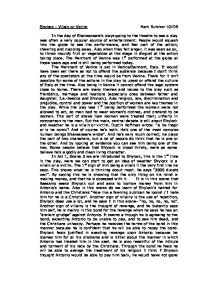 Shylock - Villain or Victim Mark Butcher 10JDB In the day of Shakespeare's plays going to the theatre to see a play was often a very popular source of entertainment. People would squash into the globe to see the performance, and feel part of the action; cheering and clapping away. Also when they felt anger, it was seen as ok, to throw mouldy fruit or vegetables at the stage in disgust at the action taking place. The Merchant of Venice was 1st performed at the globe all those years ago and is still being performed today. The Merchant of Venice is set in Venice/Belmont, Italy. It would have been set there as not to offend the audience because I don't think any of the spectators at the time would be from Venice. There for it isn't possible for some of the actions in the play to upset or offend the culture of Italy at the time. Also being in Venice it cannot offend the legal system close to home. There are many themes and issues to the play such as friendship, marriage and relations (especially ones between father and daughter. I.e.-Jessica and Shylock). Also religion, law, discrimination and prejudice, control and power and the position of women are key themes in the play. While the play was 1st being performed the women were not allowed to act, so men had to wear women's clothes, and pretend to be women. This sort of shows how women were treated then; unfairly in comparison to the men. But the main, central debate is still about Shylock and weather he is a villain or victim. Dustin Hoffman wrote: "is he tragic or is he comic? And of course he's both. He's one of the most complex human beings Shakespeare wrote". And he's very much correct, he plays the part of two characters, but a lot of people do think that he is one or the other. ...read more.

However as it is a Christian audience it is very unlikely that this will happen. Salarino quickly fires back, "There is more difference between thy flesh and hers than between jet and ivory." Here he is saying that Jessica is nothing like you, she is more like a Christian. This is what sets Shylock off into a passionate speech, it is designed to gain the audience's sympathy- "if you prick us, do we not bleed?" this is simply a very small part of the moving speech, which is a huge cry for equality which was very radical. Salarino again continues it insult Shylock when he says "Lest the devil cross my prayer, for here comes in the form of a Jew". He does show a lot of concern to his daughter, and where she is, he says "hast thou found my daughter" in a huge hope. And his anguish is powerfully shown when he says: "I had it of Leah". In this scene, I would say that he is playing a huge villainous part, although the "hath not a Jew eyes" speech really would get the sympathy of the audience, and maybe make him seem more victimised. There is also a sign of him saying something which could go into either column, depending on what it meant. He again used repetition on the line "Precious jewels". Now if he was talking about his daughter here, that would be seen as him being a victim, showing how much he cares about her, and is upset about his loss. But if he was actually talking about his money, then he would be seen as villainous, putting his money before his daughter. I think that Shylock gets driven to revenge by pointless execution. The next scene where we can depict weather we think Shylock is a villain or a victim is Act 4 Scene 1. Shylock is again presented as a villain. ...read more.

As Sir Peter Hay quite rightly says: "He becomes that which he most abhors. He's torn to shreds emotionally by the society around him. He becomes the very thing that's reduced him, that's taken his humanity away". Shylock can be seen as being all too na�ve, but a human character, on a strict religion who ends up being humiliated. It is clearly seen that in that day and age, Jews were not at all tolerated. I think because of the poor treatment that Shylock had received over the years, and I think that loosing his daughter was the final injustice. At the time of loosing his daughter and the jewels I think he would have probably said things which he didn't actually mean, sort of in the heat of the moment. Those made him seem more villainous than he perhaps was. In the end Shylock did have a right to a pound of Antonio's flesh, but seeing as the court was being run by Christians it was very much an unfair trial, he was mocked, and victimised. At the time I don't think Shylock would get much or any sympathy from the audience at all, seeing as the audience would be mostly filled with Christians. After the trial Shylock was even forced to denounce his religion and was fortunate to not loose all of his belongings. Although Shylock was not in the final scene (Which the hero of a play normally is), but I think that his presence was felt. I think that all the way through Shylock was victimised and bullied, which may have made him say/do things which made him look villainous. It's also a good idea to work out Shakespeare's views on the Jewish. I think that he is aware of the racist attitudes, and by writing this play he wants to express his views. If he was a straight forward racist he wouldn't have been given Shylock his great speeches which show how hurt and victimised he was. But he has conformed to society because shylock is still heavily persecuted. But over all I believe Shylock was a victim. ...read more.