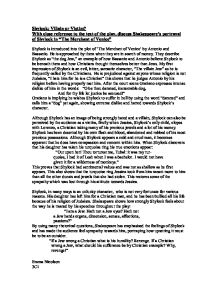 Shylock: Villain or Victim? With close reference to the text of the play, discuss Shakespeare's portrayal of Shylock in "The Merchant of Venice" Shylock is introduced into the plot of 'The Merchant of Venice' by Antonio and Bassanio. He is approached by them when they are in search of money. They describe Shylock as "the dog Jew," an example of how Bassanio and Antonio believe Shylock to be beneath them and how Christians thought themselves better than Jews. My first impression of Shylock is an evil, bitter, sarcastic character, "The villain Jew" as he is frequently called by the Christians. He is prejudiced against anyone whose religion is not Judaism, "I hate him for he is a Christian" this shows that he judges Antonio by his religion before having properly met him. After the court scene Gratiano expresses intense dislike of him in the words: "O be thou damned, inexecrable dog, And for thy life let justice be accused!" Gratiano is implying he wishes Shylock to suffer in hell by using the word "damned" and calls him a "dog" yet again, showing extreme dislike and hatred towards Shylock's character. ...read more.

This restores some of the sympathy which was lost through his attitude towards Jessica. Shylock, in many ways is an unlucky character, who is not very fortunate for various reasons. His daughter has left him for a Christian man, and he has been bullied all his life because of his religion of Judaism. Shakespeare shows how strongly Shylock feels about the way he is treated by his speeches throughout the play: "I am a Jew. Hath not a Jew eyes? Hath not a Jew hands organs, dimension, senses, affections, passions?" By using many rhetorical questions, Shakespeare has emphasised the feelings of Shylock and has made the audience feel sympathy towards him, portraying how upsetting it must be to be an outsider. "If a Jew wrong a Christian what is his humility? Revenge. If a Christian wrong a Jew, what should his sufferance be by Christian example? Why, revenge!" This shows how Shylock is fed up of being discriminated against and despised by the Christians, and also how he has a strong desire for revenge against Antonio. ...read more.

Bassanio had offered Shylock three times the money, but Shylock would have nothing and kept repeating "I will have my bond". This displays Shylock's bloodthirsty and brutal nature, showing that he wants to kill Antonio for only one reason, revenge. Shakespeare portrayed Shylock as a vengeful character whose actions revolved around his determination to harm Antonio. It is clear that he feels this way as he refuses the money offered to him, intent on fulfilling his bond. Though shown throughout as a villain, the play's climactic scene conveys Shylock as the victim once more, similar to the earlier section of the play. The audience may sympathise with the character, due to the court's decision to convert Shylock to Christianity. As this goes against all Shylock believes in, we perceive him as the victim. I would conclude that Shylock is a complicated character for whom I have experienced conflicting emotions. Though he appears vicious and bloodthirsty at times, I sympathised with his character because of his heartache for the loss of his daughter and of course the forced action of changing his faith. Emma Nicolson 3C1 ...read more.